A great night sleep following our huge day in NYC.  The plan for today was to get to DC early enough so we could see a few sights before dark and then see Arlington National Cemetery and the White House Thursday morning before continuing south toward Asheville NC.

It was a 226 mile drive that was relatively uneventful.  We needed some more fuel additive (yes we are still in the premium gas, injector cleaner additive routine) and pulled into a Chevy dealership on the way.  The dealership we selected by chance on Google and we discovered as we pulled in that it was devastated by a tornado just a few days earlier.  It was an incredible sight.  Buildings around were relatively undamaged yet this dealership was complete leveled.  Unreal.

The nearest RV Park was 30 miles outside DC so we did an extensive search for a hotel near the National Mall where we could park the RV.  Kenzie came up big with a perfect spot. 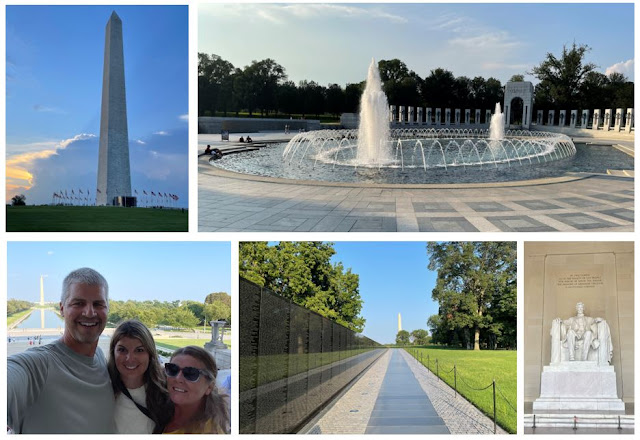 We quickly got settled then caught an Uber to the Lincoln Memorial.  Having never been to Washington DC, I had my own thoughts on what to expect based on movies and TV.  I was impressed by the size of the The National Mall.  Lots of little surprises.  For example, I knew the Smithsonian was in DC but not actually within The National Mall.  The monuments are all unique, impactful and in great condition.  Of course our step meter was off the charts again, and I was ready for some rest and dinner.
Kenzie has some good friends, Charlie and Bethany, who recently moved to Washington DC, who we met for dinner at a really cool food court called The Roost.  Highly recommended.  Food was good and you order all your food on-line and they deliver to your table.
It was nice to be in a hotel for a long shower and some room to spread out.  I slept like a rock.
The next morning came quick.  I should have realized that we had a big walking day ahead of us but there was a expansive fitness center across the hall from our room and was drawn to it for a quick morning workout.   It felt good but I would pay for it later.  We hit the continental breakfast (it was surprisingly good!) and were off to Arlington National Cemetery.  Similar to The National Mall, I was again taken aback by the size.  After seeing the names on the Vietnam monument and walking the WWII and Marine monuments, the thousands of tombstones at Arlington it really hits home the sacrifices so many men and women made for this country.  What a debt of gratitude we all owe these heroes and their families. 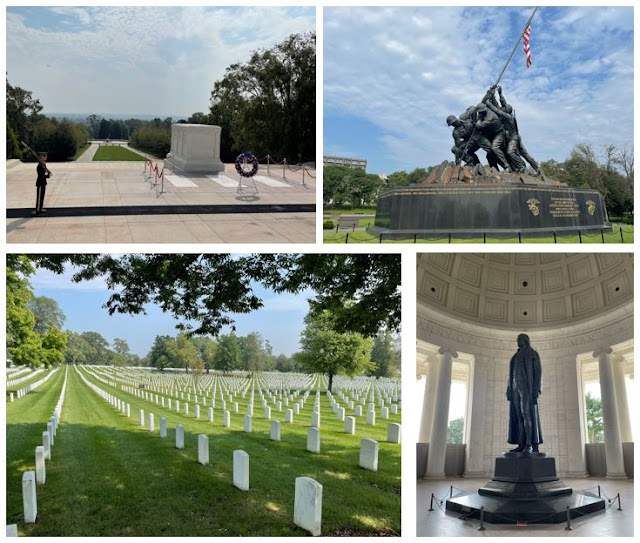 Time was running short as we had to check out of the hotel so we attempted a "drive by" of the White House but there was a demonstration and all the roads were blocked off.  We got a distant view yesterday but missed the up close view today.  Bummer.
I was really impressed with our Nation's Capitol and hope that our elected leaders never forget the original intent and vision of the Founding Fathers and sacrifices that have been made by so many and live up to those values and expectations.  I sometimes wonder......
Now we have 471 miles to Ashville.  Better hit the road.