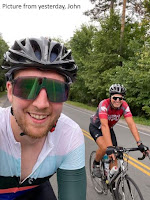 Friday the 13th and I’m scared because I am a little superstitious and the way our luck goes, I don’t want any outside influences tipping the bad luck scales against us.  Against my better judgement, I let Tom calculate the route again today.  According to my calculations we have ~64 miles to our destination of
North Hudson NY.  Well, the ride ended up being 73 miles with 4160 feet of climb.  Tom's from the UK and his Komoot is in meters so it was actually 1268 meters but I think 4160 feet sounds way harder.  The mileage difference is my fault but as for the elevation, I think Tom just likes seeing me in pain.  Total for two days for Tom and I was 127 miles and over 7400 feet of climb.  Geez.

The ride was tough but really good.  No super steep climbs, just lots of rolling hills.  Roads were in good condition and scenery was fantastic.  The Adirondacks are beautiful.  There are lakes everywhere.  So many that I think they ran out of names.  We sat on the fourth lake last night and today we road along fifth, sixth, seventh and eighth (Don’t believe me? Look at the picture)

We ended the ride at Camp Tin Box RV park.  The place was a buzz and we noticed Halloween decorations all over.  We were in luck, we arrived during Halloween Weekend In the Summer.  There are prizes for best decorated campsite, games and even a Monster Mash Dance Party.  I was tempted to attend and pull out the mosquito dance I created yesterday but we decided to head to Paradox Brewery just down the street instead (big surprise there eh?).

Burgers were the focus of the Paradox menu so we decided on a burger.  “I’ll have to double check, but I think we are all out of hamburger.”  Now that’s a new one!  They were, so we had a pizza (again).  Fortunately they were not out of beer and it was very tasty.  Tom and I had the Beaver Bite and Cheryl had the Clever Cortex and Kriti had a cider.  Following dinner, it was time for Tom and Kriti to pack up and head home.  We had a really good time with them and so appreciate them making the long drive from Connecticut.

Well, its just Cheryl and I as we hit the home stretch.  Five riding days left.  Looking at the different routes, none of them will be easy and we are out in the middle of nowhere so I hope the RV can hang on.  We are hoping to ride to Huntington VT tomorrow.  Vermont.....VERMONT!