After a tough day in the saddle yesterday, we got a good night sleep feeling especially safe next to the

police station so I was fired up to continue to drive eastward.  A little shorter route today with only about 46 miles but still some hills with over 2700 feet of climb (this included one wrong turn).  Right out of the gate I hit an incline and I was immediately weak and tired and thought "WTF? This does not feel right."  Suddenly MY check engine light was on!  I looked at my heart rate and found that it was over 170 bpm.  This was way over the 100-110 bpm that it usually is on a ride.  As many of you know, I had A-Fib late last year and had my heart shocked back into rhythm in January.  One of the symptoms was an accelerated heart rate when I worked out.  I figured that's what it was (and explains the episode I had yesterday) and took it easy the rest of the ride closely monitoring my bpm.  After the ride I went back and looked at my watch/phone and noted that it detected two out of rhythm moments last night.  Well, time for an EKG with my handy dandy Kardia monitor and emailed the PDF to my doctor for validation.  Sheesh, great timing eh?

Well, other than that, it was a wonderful day on the roads of Vermont.  Beautiful countryside rode through the capitol of Vermont (Montpelier) and Cheryl even stumbled on the Vermont Antique & Classic Car Show in Waterbury Village VT.  Of course we didn't stop at the Vermont capitol building but we had to stop at the car show.  Some really nice cars and conversations with the proud owners.  Whether it's listening to Steven talking about rebuilding a 65 Mustang convertible with his dad before he passed away or hearing about Russ' journey's in his 85 VW Vanagon which he bought new and has over 365K miles on it from traveling with his wife throughout the US and Canada.  We had a great time. 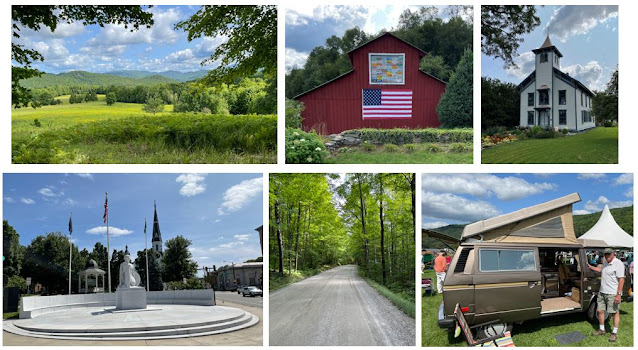 We set up camp at the Lazy Lions Campground and I quickly opened a can of my version of injector cleaner (complete with barley, hops and alcohol additives).  My first impression of the campground was not very good.  The owner Darryl was a little bit of a grouch on the phone this morning and when we checked in this afternoon.  Later I realized we were out of ice so I reluctantly walked up to the office to ask Darryl if they sold ice.  "No we do not." he quickly replied.  Then as I started out the door he says "I'm heading to the store, I'll pick you up a bag."  30 minutes later he delivered a bag of ice to our site.  Now I'm a huge Darryl fan!  Wow, so much for first impressions!

We actually BBQ'd tonight for the first time in a couple weeks which was a nice change of pace.  Tomorrow we continue on to Lincoln NH (our 14th state).  Should be about 50 miles or so depending on where we camp.  Then it is about 100 miles to Portland ME.  Hard to believe.  Hopefully both the RV and my engines continue to keep chugging along!