Roller coaster day today and quite honestly, I want to leave the roller coaster at Mall of America.  It started great by watching my college roommate’s nephew, Grant Fisher, run the 5K final in Tokyo.  I get so pumped watching him run.  He took 9th to go along with a 5th in the 10K earlier in the week.  Incredible.  Well done Grant!

The goal was to get to Niagara Falls about 70 miles away.  If I could do that we would be back on schedule (unbelievable).  The route took us on HWY 5 the entire way into Buffalo.  It was OK riding but not much to look at.  Not one barn!  Then, right before I turn on what I thought was a bike trail, I hit the first of what would be multiple construction sites.  I know I bitched about the road conditions early on and I know that it takes construction to fix the roads, but I still feel like bitching about the road construction too! OK?

Then, what Google told me was a bike path was actually a shipping and receiving area in heavy industrial Southwest Buffalo.  Great, Mr bike jersey and tights riding amongst the longshore men.  Not good.  I got a few stares but fortunately no whistles.  I road right through Buffalo and though there was some paved bike trails along the lake, most of the ride was not very good.  To top it off, with about 2 miles to go in ANOTHER construction zone, me and a car miscommunicated, and I stalled and couldn’t unclip.  Timmmmberrrrrrr!  Now I have a bruise on my left side to match the bruise on my right side. 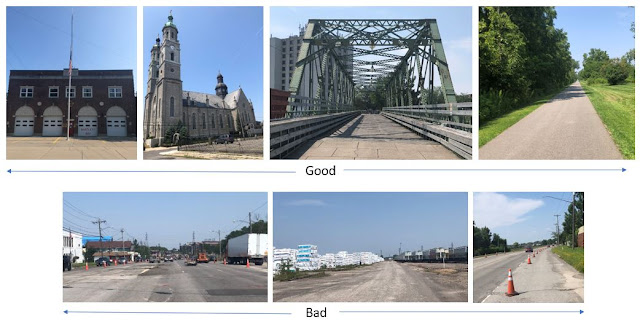 I finally made it and now it was tourist time!  We headed out to see Niagara Falls! For those that haven’t been, it’s a really nice state park on the border of Canada and the U.S.  There was designated RV parking which is always a stress reliever and I appreciate almost as much as The Falls!  There is an island separating the two major falls Horseshoe and American.  The falls are on the Niagara River which connects Lake Erie to Lake Ontario so no wonder there is A LOT of water (168,000 cubic meters a minute according to Wikipedia).  That completes Chris’ fun fact portion of todays blog.

Since we were doing the “tourist thing” we figured we would go on the Maid of the Mist boat.  You know the one.  Where everyone gets the fashionable plastic ponchos and you actually ride a boat into the horseshoe.   I was skeptical but it was AWESOME!  Being so close to the powerful wall of water (168,000 cubic meters a minute in case you forgot) was breathtaking.  The wind and mist created was also very “cool”.

On the way home we decided to stop and get a pizza to go.  While waiting, we did what we always do, and Cheryl started up a conversation with a local resident.  In this case, the man (we neglected to get his name) was a tour bus driver for retired people going to the casino.  He said “you can’t believe the off-color jokes I hear from the old folks.  You want to hear some?”  “Uh…sure…I guess” was our reply.  So here we are, in Niagara City, waiting for a Meatlovers pizza at Leon’s Pizzeria listening to off-jokes.  You can not make this stuff up.

We came home and watched the USA men win the gold (yes!) and went to bed.  Not sure what the plan is for tomorrow.  Since we back on schedule we actually have a rest day available.  I don’t really want to spend it in Niagara City.  Since we saw The Falls and heard the jokes there isn’t much left to do here.  We’ll see.  One thing for sure is that we are sleeping in.