The reference dates for the trip can be broken down into two sections, BC (before Coffman's) and AD (Aurora Departure).  Today was 2 AD.  It started out with the normal routine (which I LOVE) with the added bonus that today was the single debut of the yellow jersey Kyle and Casey gave me.  It was a 68 mile flat route to the KOA east of Pemberville.  Everything was perfect and then this happened...... 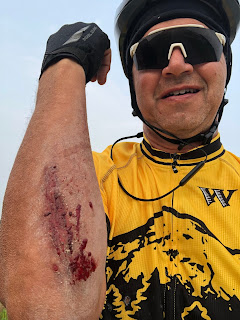 I've biked over 2800 miles with a few close calls but have always kept the bike upright until today.  It was a fantastic morning with cool temperatures, no traffic and a terrific roads (sort of).  About 10 minutes into the ride I was cruising at about 20 mph and approached an intersection.  I slowed slightly to look both ways (safety first!) and had to take my eyes off the road (just for a second!) and there was an acute dip in the road.  The bike bounced and I felt like I was on a mechanical bull and unfortunately I am not the Urban Cowboy and started to go down.  I tried to save it and when I realized that a crash and burn was imminent, I tried to bail in the grass on the right.  I didn't quite make it and hit the gravel with my right side.  I got a pretty decent road rash on my arm, chest and leg and left thumb jammed into the handle bar so that is sore as well.  Fortunately, the bike was fine (a few minor adjustments were needed).  I got up and started riding (after a few thank yous to the bike gods that nothing was broken).    A quick call to the SAG wagon and Dr. Cheryl was ready to spring into action at the next stop with the first aid kit.

The rest of the ride was really good though there was no place else to go but up.  It occurred to me that I have been talking a lot about the corn (rightly so as it is EVERYWHERE) but there is nearly as much soybean.  We had a roadside discussion with a farmer (you know me, hobnobbing with the farmers) and he said they rotate corn and soybeans because soybeans leave nitrogen-rich residue in the soil which helps the corn the next year (my Mr. Science fact for the day).  I decided a soybean selfie was in order as I don't want to play favorites.

As is typical for me when I have an incident with the bike, I feel guilty and give it some extra TLC.  I really cleaned all the gears adjusted everything and as I was inspecting the tires I noticed a chunk had been taken out of my back tire.  So glad I found that tonight as it is much more enjoyable changing a tire with a beer in an RV park than on the side of the road.

As the evening wore on I noticed I was getting pretty sore from the tumble earlier today.  Dr. Cheryl suggested some Tylenol.  Patient Chris decided on a little honey whiskey.  It went great with Janet's pie!
Tomorrow we head towards Cleveland and will ride the next few days along Lake Erie.  Looking forward to that!