Day 64 - Safe and sound at the police station.

We survived Friday the 13th so I decided to push my luck and went with the yellow Widmer jersey that I swore was bad luck and would not wear again.  Unfortunately, we haven’t done laundry in a while and not wearing stinking jersey’s outweighed superstition.  I will admit that I was a little stressed out before today’s ride for the first time the entire trip.  The reason was that the “bike route” took us into the deep dark woods of the Adirondacks where I expect to see banjo playing backwoodsmen.  With the RV not running great, I was not comfortable.  We had the route and decided to go with it but after about 2 miles we ran into gravel, so we had to regroup (actually a blessing).  Everyone knows two heads are better than one, especially when one of the heads is mine and Cheryl suggested “let’s just follow the car route.”  Brilliant.  There isn’t much traffic, no Interstate, and if there is trouble, we are in more populated areas.

From there it was an amazing ride.  56 miles and 3221 feet of climb.  So much to see I had to add a few extra pictures.  I will admit that I did not feel well during most of the ride which made it more difficult than it should have been.  Not sure why.  Maybe Tom’s climbing routes or my anxiousness of where we were going/not going this morning.  If I didn’t “bonk” I was damn close to it.  We made it into Vermont and stopped in the fun little town of Vergennes (est 1766) and had lunch to let me gain my strength for the final 15 miles to Hinesburg VT. 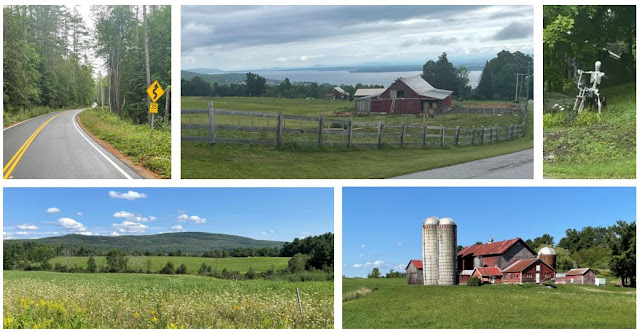 Hinesburg is a great little town (population 772).  When we arrived, we went straight to the laundromat to get those jerseys clean.  The laundromat was in a little mini-mall and while we were sitting in the RV waiting for the clothes to wash/dry we had multiple people come up to us and talk about our journey and tells us about theirs.  We learned about following NASCAR in an RV, dogs people had, work at the SS welding at the Idaho Engineering National Laboratory.  I so enjoy talking with people in these small towns.

Once the clothes were clean, we decided to figure out where to sleep for the night so, of course, I went to the local police department for advice.  After I explained our situation, the officer (neglected to get his name) said “hmmm, why don’t you just sleep in our parking lot between the fire station and the police station?”  Sold!  No safer place than that!  As if that wasn’t good enough, the “Public House” restaurant where we wanted to have dinner was only three doors down the street.  Truth is, all businesses were no more than three doors up or down the street.

I had the burger I didn’t get last night (they actually had hamburger in stock) and Cheryl had a salad.  It was good food, drink, and a nice atmosphere.  From there it was back to camp (aka police/fire station) to get ready for tomorrow.

We have reservations at Groton Forest Road Campground about 64 miles away tomorrow night so no need for a call to the police station.  Still in the Appalachian Mountains which means more climbing.  Need to get my rest!