As much as an uneventful, straight forward day was yesterday, today was quite the opposite.  Nothing bad happened (I’ll get that out of the way early), but we packed a lot in.  Grab a cup of coffee/tea if you’re reading this in the morning or an adult beverage if it’s in the evening.  Hell, I don’t care when you drink your adult beverage, just get comfortable.

We started out in rural Ohio west of Cleveland but knew we would be in the city within about 10 miles.  The route would take us directly through town ending at Euclid Ohio (a suburb east of the city).  Scheduled mileage, about 62.  We thought it would be fun to stop at a local diner for breakfast so about an hour into the ride we stopped at Nest.  I don’t know if it was because it was mid-morning on a weekday, or if there was a retirement center close by, but it felt like an AARP convention.  Being Cheryl and I are proud card-carrying members of AARP we were excited to join the crowd and we fit right in (well, my tights and jersey stood out a bit).  A great breakfast (Cheryl had the Mom's Platter and I had the Avocado Quesadilla and coffee) which I admit I took a picture of..  Total bill?  $16.13.  That was before the AARP discount.

The ride into town took me along Lake Erie on Lake Drive (appropriately named).  The views during the ride were beautiful with huge, early 1900s homes with beautiful landscaping.  There were miles of these magnificent homes on the east side of Cleveland.  I hear there is “old money” in midwestern and eastern cities. I don’t know if it is new or old money, I just know it must be a lot of money!  The roads were in terrible condition and I wish some of that new/old money would go toward some asphalt.  Not wanting a road rash encore, I had to watch the road and missed much of the scenery.  You will notice in the picture group a beautiful “twilight” picture.  More on that later…. 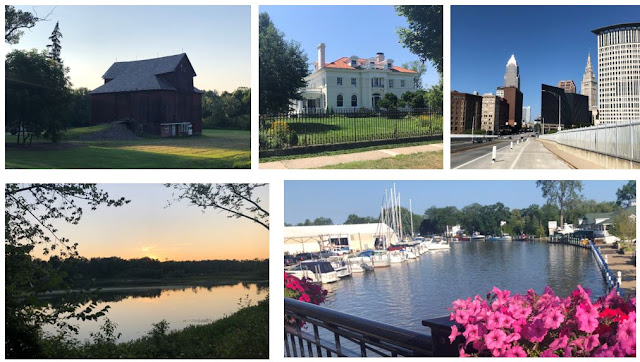 We talked a lot about what to do in Cleveland.  There is the beach, museums, shopping and of course the most famous of all…..the “A Christmas Story House.”  Many of you probably think the house is in Indiana but you would be mistaken.  The movie takes place in a fictious town in Indiana, but the actual house where much of the filming was done is in Cleveland. Filming was also done in a soundstage in Toronto.  Damn, the things people can learn from this blog!

We enjoyed seeing the famous leg lamp, the bar of soap Ralphie had in his mouth and I even picked up the red rider BB gun (not original of course) but it was fun to see the house.  With the most important item checked off the list, we decided on the next point of interest.  Ahhhhh the Rock and Roll Hall of Fame!  Quite honestly, I had forgotten it was in Cleveland and I am thankful I did one check on Google before we continued the ride.  The Rock and Roll HOF was really good, and I highly recommend it.

OK, enough of the sightseeing, its 5 pm and I’ve still got 15 miles to Euclid.  Being that it was already late afternoon we decided dry camping in Walmart parking lot was on the docket for tonight.  When I arrived, Cheryl informed me that we were not allowed to spend the night there and police and security guards were circling the RV like vultures.  Hmmmm what is the back up plan?  We don’t have one.  Our Google searches found a KOA 23 miles southwest, completely the opposite direction.  OK, let’s call the police for a recommendation.  Sounds crazy but it’s worked the other two times we’ve tired.

The non-emergency dispatcher was a very nice man who quickly said “You in Euclid now? I would strongly suggest you leave as it is not safe to stay the night in Euclid in an RV”  Yikes! OK.  So he transferred me to the Ohio Department of Natural Resources dispatcher.  First of all, I don’t even know what the Department of Natural Resources is and why do they have a dispatcher?    Regardless, she was also very nice and though she couldn’t help, she transferred me to the State Park Reservation desk (heavy use of the phone transfer function).  From there, Cecelia was able to find us a spot at Punderson State Park.  18 miles away and “sort of” in the direction we need to go.  Not sure why it didn’t show up on our searches, but Cecilia was a life saver.  Now time is a factor and I need to get moving to reach Punderson before dark (hence the twilight photo).  Yes, even when I’m in a hurry there is always time for a good photo!

So, I made it just in time (82 miles for the day btw) and Cheryl and I had a nice dinner and a shower and a little much needed relaxing time from a very busy day.  Tomorrow, we are still following Lake Erie towards the northeast.  Expecting a much calmer day, but we’ve learned not to plan on that. 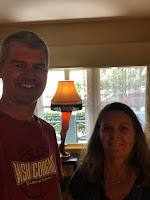