Expecting a shorter, routine day today. 55 miles to Westfield, find a place to sleep and it’s on to Buffalo. Easy Peasey. Nope, didn’t turn out that way (shocker). The big news of the day was that we hit the 3000 mile milestone! That means a couple things: 1) We get to open the milestone box from the kids which is very special to Cheryl and I.  2) it means we have traveled a long way and it’s no wonder I want to nap after every ride.  We are definitely on the downhill side with 800 miles to go. Crazy!
Our initial plan was to ride into Erie and have breakfast at Dave’s Diner, a local old school restaurant.  As I entered Erie and about a mile from Dave’s Diner I noticed a familiar building with a familiar name to my right.  Where do I know that building? I thought.  Think Chris, think!  Oh yes! That is the building from season 1 of the “Undercover Billionaire!  Underdog BBQ.  We watched that season and know all about it.  How crazy is it that I just stumbled on to it?  Since it was only 9:30 am, we decided that we have to come back here for lunch.  Sorry Dave, we are setting aside a late old school breakfast for a brisket lunch at Underdog BBQ!
I continued riding through Erie and noticed many very old, large churches.  Not sure why but I had not seen this many since our days in Europe.  As we were leaving the town heading east on HWY 5 when we noticed a road closure and detour.  This was no ordinary detour.  It was the longest most complicated detour in the history of road construction.  Instead of going one block down and continuing in the same direction, it went one block down and turned in the OPPOSITE direction (west).  Seriously?  Cheryl was ahead of me as called and said, “You need to find a different route as I am 3 miles in and still going west!” Fortunately, I turned around and found a route through a neighborhood that intersected the detour when it finally headed east bound.  The rest of the ride was very nice along Lake Erie (sheesh I can see why its a Great Lake).  We even unexpectedly rode through some vineyards.  Total for the route was 66 miles with nearly 1600 feet of climb.

I did receive some harsh feedback for abruptly discontinuing the barn pictures so here you go John (Ha!). Funny how they just keep coming!

As lunch time approached, we decided to take a break and head back into Erie to Underdog BBQ.  It was fun seeing the building and smoker from the show that is still in operation.  Our server, Caitlyn, was on the show in later episodes.  She was delightful and told us about Erie, her 4 kids and how her grandparents also love to ride their bikes.  On top of that, the brisket sandwich was one of the best I had ever had. Not better than Kyle’s on the Treager of course!  It was an unexpected pleasure that we enjoyed very much.
Looking at the picture, Cheryl says I’m losing weight and look like a bobble head. It is tough to argue I guess. 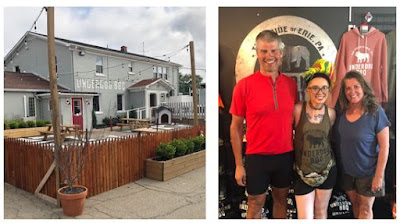 We crossed the border and are now in New York, The Empire State. We hope to hit Niagara Falls tomorrow.  We may forgo the RV Park and replace with the pink honeymoon suite!  I get excited thinking about that! Gonna ride fast!