The Trip Home - Asheville "Plan B"

It is over 461 miles to Ashville from Washington DC and since we did not leave DC until after 1 pm and we don’t like to drive more than 350 miles a day that leaves a midpoint stop somewhere.  We looked “Harvest Host” and what appeared to be a fun distillery called Old Nick Williams Distillery 326 miles away.  That would leave us a short drive to Ashville on Friday. 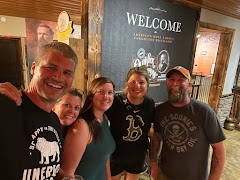 The route took us through Durham NC, home of Duke University and Cameron Indoor Stadium.  We first had lunch at a fun brew pub called Grub Durham on campus.  Our attempt to get to Cameron failed miserably.  As you can imagine, parking the RV on campus so we could walk to Cameron was impossible and even a drive by was difficult because it was tucked off the road and behind the trees.  Swing and a MISS!

We continued on to the Old Nick Williams Distillery.  The distillery is currently owned by Zeb and Ashlee who are the decedents of the founder who first opened it in 1768.  It is claimed to be the oldest distillery in NC and possibly the USA.  Zeb and Ashlee were terrific and even though we showed up just before closing, they continued to serve us and talk about the history of the business and their current plans well into the evening.  Fun Fact is that this distillery was featured on the reality show Moonshiners.  When it got late, Zeb prepared one last drink for us and allowed us to stay on the distillery porch with the music playing as long as we wanted.  “Just unplug the jukebox and turn off the lights when you’re done.” He said as he got into his pickup.   It was a beautiful night, but we didn’t stay out too long as we wanted to get to Ashville early the next day.

We made it to Asheville before noon and our original plan was to float the river then check out a few restaurants and breweries as Asheville is known for it’s restaurant and pub scene.  Unfortunately, a few days earlier the French Broad River flooded, and it was still very muddy and not good for floating.  So, Kenzie pulled together a terrific “Plan B.”  An Asheville Pub Crawl.  Perfect!

I’m a little embarrassed to say that we hit 10 different breweries/wineries/restaurants.  I will say that after the first few, we quickly decided that we could not order our own drink at each location if we expected to finish, so we started sharing beverages.  Some may call us wussies but I think intelligence won out this time.  Here is the list: Home Ground Pub, Plebb Urban Winery, Wedge Brewing, 12 Bones BBQ, Old London Road Pub, Iconic Kitchen and Drinks, Burial Brewing, Green Man Brewing, Catawba Brewing and Bhramari Brewing.

I will admit that I had heard so many great things about Asheville that I tried to lower my expectations so as not to be disappointed, but I was very impressed.  So many unique places to go.  The food was outstanding (really liked 12 Bones BBQ) and beer and wine delicious.  Good vibe throughout.  We spent the most time at Catawba Brewing as there were a couple of fun bands playing.  There was a short interruption as the local baseball team set off some amazing fireworks after their game and the field was next to Catawba Brewing so we got a front row seat.  What a fun day/evening.

Surprisingly, I didn’t feel too bad the next morning and we got Kenzie off in time for her Saturday morning flight.  It was back to just Cheryl and I for the rest of the trip home.  We thoroughly enjoyed our few days with Kenz and were sorry she had to go.