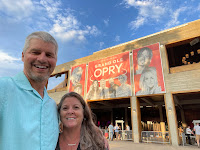 Saturday was August 28th and Cheryl and my 38th wedding anniversary.  38 years!  It has been truly an amazing time.  We should get an extra year for 90 days in a 24 foot RV!  We didn’t have anything special planned other than trying to get to Nashville.  After we said good-bye to Kenzie, Cheryl and I started the journey west hoping we could make it to Nashville about 300 miles away.  The drive was on HWY 40 the entire way and not especially memorable.  The RV continues to chug along and actually ran pretty well. 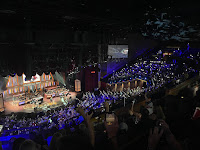 We arrived in Nashville in the mid afternoon at Nashville RV Resort.  We spent some time settling in and pulling together our evening agenda.  Though there are many sights and attractions to consider, including the Country Music Hall of Fame, Johnny Cash Museum, Ryman Auditorium and many others, we decided a show at the Grand Ole Opry and a walk down Broadway Street finding a place for dinner would make for a nice anniversary.

We were fortunate that tonight was a weekly show at the Grand Ole Opry where there are multiple stars each singing a few songs.  The show was broken up into two halves.  The 1st half was the legends John Conlee, Bobby Osborne & The Rocky Top X-Press and Connie Smith.  Bobby Bones did a funny comedy routine and then the 2nd half consisted of the young big hitters.  Michael Ray, Rodney Crowell, Laine Hardy and Lauren Alaina.  According to the couple next to us, this was a great line up though I didn’t know any of them.  It was a very entertaining show and fun to be in the building where so many famous people have performed over the years.

After the show we caught an Uber to Broadway street and I got to say, it took me a little by surprise.  It was CRAZY.  People have compared Broadway Street in Nashville to The Strip in Vegas and in my humble opinion it’s not even close.  Sure Vegas is MUCH bigger but the Nashville crowd was much wilder.  They close down the street and there are bands playing with the doors open in nearly every bar/restaurant and as you walk down the street you can hear them all playing at once.  Bachelorette parties everywhere.  Celebrating our 38th anniversary, Cheryl and I felt a little out of place.  We showed up a too late for a nice dinner and even the multi-level food court was shutting down so we settled for some Italian pasta in To Go containers.  Dessert was some not so good lemon cake for $10.  Not much of an anniversary meal.  Oh well, this entire trip has been about adjustments.  We’ll do something better when we get home.