After 15 days of riding solo and Cheryl desperately looking for someone new to talk to, we have 2 new riders joining the team.  We have a peloton back!  My son Kyle and nephew Casey arrived safely in Chicago (their bikes made it too!) but more on that later.

As for the ride today.  What difference 24 hours makes.  Yesterday was one of the best rides of the trip 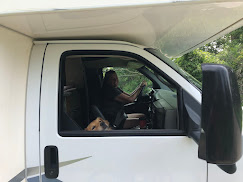 while today was definitely lower third.  There were a variety of reasons, the biggest of which I think was the road conditions.  I was on a lot of different highways and backroads today and none of them were in good condition.  I guess I'm now in favor of the infrastructure bill!  In addition to the 74 miles, there was also 2560 feet of climb and that didn't help much. Fortunately for me, I again had some beautiful scenery to watch go by (I know, I sound like a broken record).  More importantly, I also have Cheryl and Zuri as inspiration.  What was special about to today, though, is that the corn is high and close to harvest (it look more like corn) and looking out over the horizon the cornfields stretched for miles.  It was spectacular.  The other significant happening was that we made it to Illinois, the Prairie State.  We were a little bummed that since we were on a back road there was no "Welcome to Illinois" sign so we had to make do with a road sign that said Illinois on it.  Poor substitute I know. 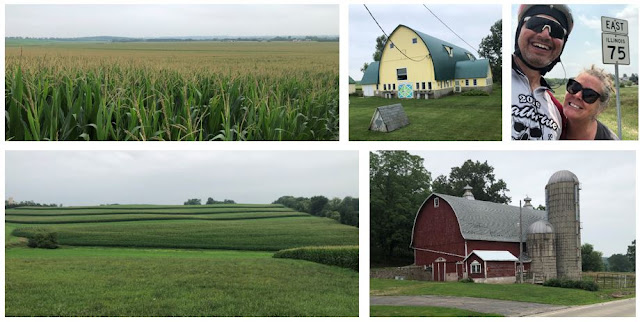 But of course the big news of the day was Kyle and Casey's arrival.  I must say that even though I boasted how I would keep on schedule and there was no need for flight insurance when they bought their tickets months ago, I will admit I had doubts.  To travel 2430 miles on a bicycle, over 42 days and be at O'Hare airport picking them up the day we agreed is a little shocking to me.

Cheryl and I set up camp, got the RV ready for 2 more bodies, did some shopping and were off to O'Hare airport. Kyle suggested they Uber a few miles out of town to avoid having to take the RV into the chaos of the airport arrival terminals.  "Nonsense!" I shouted.  "That's why we got the smaller RV."  Later, as 4 lanes of traffic were trying to fit into 3, horns were honking and "12 foot clearance" signs were flashing, I got to thinking he might be right.  We crept along (I followed a taller rental car shuttle just to be sure I could clear) and were able to successfully load them up.

Delicious pizza from Giordano's and a couple of beers were in order to celebrate the new team and build up strength for the most important task of today...... putting the bikes back together again.  Unfortunately Danny and
Robbie at Coulee Bike Company are a few miles back on Onalaska and can't help us.  Since it was 9:30 pm we had to work under the dim light of the shower building.  All three of us were already in the dark on where to begin so less light didn't really make a difference.

Kyle and Casey did the majority of the work and I occasionally repositioned the iPhone light and before you know it, the bikes were in riding condition.  I was very impressed.  Reminded me of a couple of surgeons "Kyle, can you hand me the 5 mm stat?" The real test will be tomorrow as we make our way to Batavia IL.  I am confident the newly formed peloton will make it without a hitch.