Well according to the master route schedule, today was supposed to be a rest day.  Well, according to the master route schedule, we are supposed to be in Mansfield which is 42 miles ahead.  I knew this would happen when we pulled the audible to go the Badlands so now it is time to pay the piper.  I didn't think it would be a big deal since yesterday was such a good day, it almost felt like a rest day.  Funny how things change.  The goal for today was to reach Aberdeen SD.  It is actually a decent size town (~27,000) where we are planning to have that elusive pizza, resupply and do some laundry.  We had planned to do laundry last night but King Kong and Godzilla crushed that idea.  I am wearing what I wore yesterday thanks to that movie and a little ripe under the jacket.  The day started out pretty good with "the breakfast of champions," the extra cinnamon role we bought from Chrissy and Carl in Gettysberg.  It was delicious, but not sure how I will feel about it on the road in an hour or so. 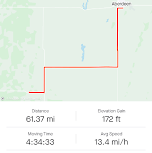 It is so funny how the actual terrain in this part of SD is fairly flat but the ride difficulty has been like a roller coaster due to the weather.  Awful riding conditions Thursday, perfect riding conditions yesterday, back to awful riding conditions today.  The wind lifted it's ugly head again coming out of the north so as you can see from the etch a sketch route I took today, everything north was in the teeth of the wind.  In addition, I had rain for the first two hours.  Could have been worse though as Cheryl scouted ahead and saw thunderstorms with torrential downpours so she came back to warn me and we waited it out in the RV (nothing in the rule book about that!)

In terms of scenery, lots and lots of corn fields as can be seen from the video (Video of the corn) If you listen carefully, I seem to have my months mixed up. 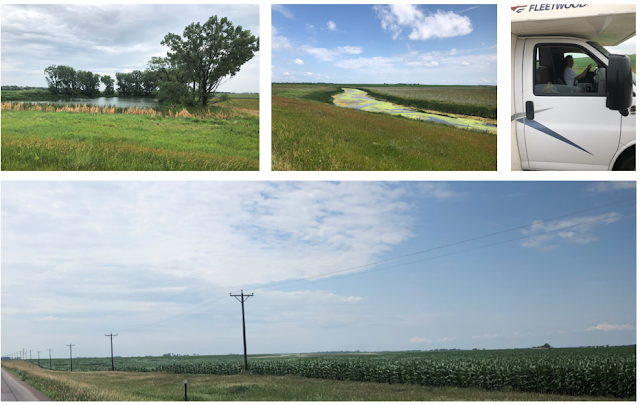 Once we got into Aberdeen it became utility day.  Stock up on supplies from Walmart and do some laundry.  Not too exciting.  The Walmart supercenter in Aberdeen is the biggest I'd ever seen (BTW I Googled biggest Walmart and it's in Albany NY if you're curious)  We haven't been in a town larger than 500 people in 4 days where the entire store is smaller than the chip aisle in this Walmart.  My big excitement for the day was the PIZZA! I looked on-line and Jimmy's Pizza got the best reviews saw off we went!  I didn't look close enough at their web site that it was take out only.  I wanted a draft beer and pizza really bad, but we decided to take the pizza back to camp and relax and play some cribbage.  If you look closely at the pictures below Cheryl captured rare footage of me in a laundromat.  She won’t let me near the wash cycle (these clothes need to last) I just get to empty and dry.

That's it for today.  Not too exciting.  We are off to Webster tomorrow and then to Ortonville on Monday which will put us back on schedule.