Another early wake up call at the Holiday KOA in Billings.  Did I mention that it was the first KOA ever created?  Built in 1962.  Yes I know you're impressed.  Our starting point is the Billings airport since that is where we left off yesterday when we got the rental car for the trip to Beartooth Pass.  In addition to returning the car (fill with gas first), fill/empty the RV tanks, drive to the airport, have breakfast, and get the bikes ready, we had one additional task.   Jack's legs and heart are in great shape (he's been carrying me) however, his butt is a

little tender.  When he rode the spare bike, he thought that seat was better so he switched it out this morning before we hit the road.  We really needed to get moving since it will be 101 today in Crow Agency our destination 66 miles away.

Since I had not been lost in close to a week, I of course, had some trouble getting out of Billings.  Jack got to see firsthand my struggles with Siri.  Turn left, in 100 feet make a U Turn.  Once we hit HWY 87 it was a fantastic ride.  Peaceful, little traffic (we road side by side) and beautiful.  The last couple days have been filled with high traffic roads with rumble strips that about knock you over when the 18 wheelers cross them.

Since we were heading out into the unpopulated vastness of southeast Montana and South Dakota (feels weird writing that), Cheryl wanted to resupply so we agreed to meet a little later than normal on HWY 87. 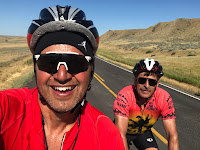 We got our wires crossed and before you know it Jack and I have ridden over 3 hours and 46 miles without a break.  Once we finally met up with Cheryl we were 20 miles outside Crow Agency and it was already 93 degrees.  The wind decided to really kick up and before you knew it, we were riding in a sauna with 15 mph hot air being blown directly in our faces.  Hot air, hot headwind, even hot Gatorade (hot Gatorade sucks big time!)  Surprisingly, Jack’s impenetrable metal showed signs of cracking (mine had already disintegrated).  It was brutal.  When we finally met up with Cheryl in Crow Agency it was 97 degrees!  The rain in the Gorge was looking pretty good as we labored across the finish line.

We were very close to the site of the Little Bighorn Battlefield National Monument, so we decided to visit that prior to setting up camp.  But before that, Jack and I had to cool down and eat so we went to the Custer Battlefield Trading Post and Café.  In case you didn’t know, their Crow Indian Taco on fry bread was featured in the July 2017 Oprah Magazine(impressive I know!)  Not to nitpick, but I think it's actually more of a tostada but it was very tasty.

By the time we hit the Little Bighorn Battlefield National Monument it was 101 degrees so we didn't stay as long as we would have liked.   It was very interesting and standing on the actual ground where it took place was pretty impactful.

We set up camp at a nice RV park call the 7th Ranch RV Camp and drank literally a gallon of liquid, ate some tacos and had a cool shower.  Ahhh heaven.  We then took a hike around the RV park to the top of a ridge and a beautiful view of the area.  Do not ask me why I just didn't collapse in the RV but it was fun to get out and talk to Steve our camp host and apprecaite the area  Tomorrow is another 64 miles to Ashland MT.  It's supposed to be 102 there tomorrow.  Yum, more hot Gatorade.