Wow what a day today was.  Get comfortable as there is a lot to review....
We got up and out from Bob's quickly as we thought it would be fun to stop in Gettysburg (not where the battle was) to have breakfast and decide our next destination.  It was chilly and misty but very little wind.  I will trade mist for wind any day.

We came across a small cafe called Firehouse Cafe as we entered Gettysburg.  Your typical cafe for a town of 1300 people.  Breakfast was very good, including monster cinnamon roles that set us back

$1.50.   Our server (Chrissy) and the owner/chef (Carl) were extremely nice.  We were chatting and asked if there were any hidden gems in this part of the state we should see and Chrissy suggested we stay the night in Gettysburg.  "The VFW is having an event tonight and raffle tickets are $2.  If you win you get your name posted on the wall!"  As enticing as being immortalized at the VFW in Gettysburg sounded, we needed to get some miles behind us so we continued on to Faulkton.

Funny what a difference 24 hours makes.  I had one of the most difficult rides of the trip yesterday and today was probably the best ride so far.  Temperature was perfect, light wind, no traffic and shoulder was excellent.  In fact I owe the SD DOT an apology after ripping them yesterday. Today I had 20+ miles of newly paved shoulder.  It was AWESOME!!!

We are definitely moving from the grasslands to corn country.  Corn as far as the eye can see.  Lots of beautiful countryside.

After 58 miles, we decided to stop in Faulkton is a farming community (thank you Capt Obvious) of about 800 people.  We really like it.  The first thing we noticed was that you could camp in the city park and they had electric hook ups!  The price you ask?  Simply put a donation in the box when you leave (4 night maximum stay).  Its a fun town know for having murals painted on many buildings throughout town,

Of course we had to walk the town and meet some of the locals so we stepped into J&J Bar (shocker).  There we met Jim Speck the owner/operator for over 40 years.  He had some interesting stories to tell about his family and the town and then mentioned a pull tab competition he is having with a friend.  He proceeded to go out to his pickup truck (unlocked with keys left in the ignition which is SOP in Faulkton) and brought them into the bar.  His face lit up as he talked about his collection.

I had a few minor fixes on the RV including the screen door mechanism and a rattle in the water pump (all in a days work for an RVer) and we spent some time walking the rest of the town.  For dinner we went to "Dot T Steakhouse"  No there is no trend here from yesterday, its just that this was only 1 of 2 restaurants in Faulkton and I didn't feel like a burger basket from the drive in.  We met the owner Dave Huss.  He was incredibly friendly and talked about his father who was part of the Flying Tigers in the Pacific in WWII.  He named his plane Dot T after his wife (restaurant too).  He also mentioned how his mother bought the restaurant when it went out of business because "the town needs a restaurant."   They were corn farmers but learned how to operate a restaurant too.  The place was buzzing tonight so they must be doing something right.  I noticed they had 3 RV full hookup spots in the parking lot and asked Dave how much does he charge.  He said it's free if you eat at the restaurant.  In his words "I make a little money off you when you eat here, no need to gouge you if you want to stay the night."  Wow, we could all learn something from Dave. 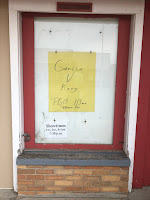 Finally, Dave asked if we were going to the movie theater tonight.  Apparently his dad built it years ago and they still run it.  King Kong vs Godzilla was playing.  Not our genre but hey, sounded like fun.  We went in to buy our tickets and who was there in the booth?  Yep, Dave was taking tickets!

Though I am challenging myself physically to pedal across the US, the real point of the trip was for Cheryl and I to see the country up close and meet different people in all the diverse communities.  Though physically I'm tired, meeting the wonderful people in these communities always energizes me.  I'm so grateful for this special experience.

Tomorrow we are on to Aberdeen.  A mega city compared to what we've seen lately.    It is still threatening rain, I hope the weather holds.

By the way, we are now on Central Time.  How freaking crazy is that?  We are in our second time zone!