Thank God It's Rest Day! (TGIRD)  Number 3 if your counting and believe me I am.  Due to some scheduling modifications to ensure both Skip and Jack could join me this, I just completed a 9 day streak (566 miles) and following the tough ride yesterday I was ready for a break!

On tap for today was a mixture of site seeing, getting Jack off to the airport and some general chores in and around the RV.  I thought this was a biking trip but it turns out to be the biking and RV repair combo.  More on that later....

The day started out terrific.  A nice cup of coffee while we got the RV ready for the day and then we hit a local breakfast place call Morningside Cafe.  While we waited for our food (we all went for omelets) I noticed the décor of the restaurant consisted of John Wayne memorabilia and artwork.  I asked the
waitress if there was significance to the tribute to The Duke and she said "Nope, the owner is just obsessed with John Wayne."  Got it.  I just thought that was interesting.

We hit the first of our two tourist stops today, Mt Rushmore.  We have all seen pictures of this monument hundreds of times but it really was cool to see it in person.  The overall experience was awesome.  I stress about RV Parking at places like this but they had a designated spat and directed me right there.  Nice! We couldn't spend too much time there but watch the video on the making of the historical carving and of course the obligatory selfies!

The next stop was Crazy Horse.  Similar to Mt Rushmore, Crazy Horse is a statue being carved from a rock in the Black Hills mountains.  It is a tribute to Native Americans and I was pleasantly surprised there is a complete master plan for the area including museums and a college.  Though already impressive, once the vision is realized it will be incredible.  Yes more selfies! 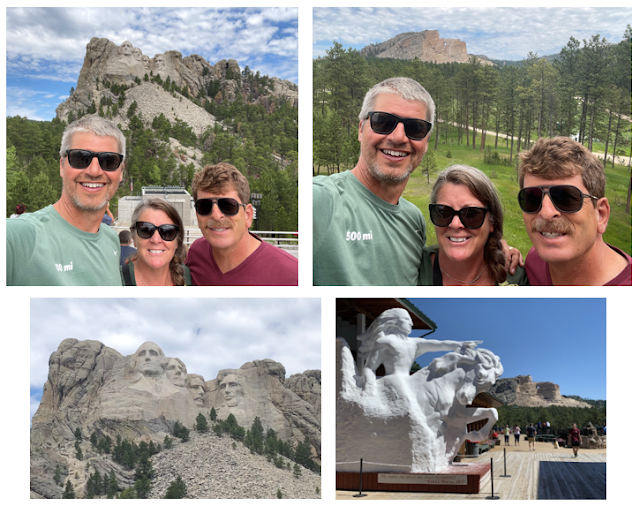 We got Jack to the airport in plenty of time to check in his bike and board his plane, hopefully both will arrive together this time.  It was a pleasure to have Jack along for part of the ride (A BIG part).  I have him down for 512 miles!  Well done!  Well, it is back to just Cheryl and I for 17 days until Kyle and Casey join.  Wow, let that sink in.  My body hurts just thinking about that.

The generator was not running smoothly so I needed to replace the air filter, spark plug and blew out the flame arrester and now it runs like a champ (thank you very much).  Some of you may be thinking why didn't you do this BEFORE the trip.  That's a pretty good question for which I don't have a good answer other than I was told it had just been serviced and it seemed to run OK before we left.  I also replaced the wiper blades.  No I don't know why I didn't do this before the trip OK?  As if that wasn't enough, the check engine light came on.  The test said "Fuel Trim System Lean."  We think we put some low grade fuel in it so we put some additive in the tank and added some super unleaded gas so we hope that does the trick.

On our way back to our RV park I missed a turn to get on the freeway (big surprise there).  I pulled into a Chili's parking lot to turn around and Cheryl's exclaimed in excitement, "A Chili's!"  I was somewhat taken aback because I had always thought of Cheryl as a Red Robin kind of gal but she told me that all the Chili's in Oregon and Washington had closed down and she has been carrying around a gift card with $23.90 on it for years.  So we pulled in and had a beer and a snack.  For once my poor sense of direction worked in my favor.

The highlight of the day was a FaceTime call with the family.  We text a lot but there is nothing like seeing them in real life.  It was so nice to catch up.  Cheryl and I miss you all very much.

Well I'm back on the bike tomorrow (solo).  Weather has cooled quite a bit and it may even rain!  We are thinking about calling an audible on the route.  Not 100% sure so I'll let you know tomorrow.