The Hay Creek Valley Campground and Old Western Saloon was a few miles from our ending spot in Hager City, so per the rules established for this journey we needed to drive back to Hager City where I quit riding.  We had the usual morning routine including disconnecting the RV and emptying the tanks, getting the bike ready, making sure all electronics are charged, getting bottle ready, clothes on and having breakfast.  All of these morning activities including the drive back, meant I was not pedaling until 8:30 am!  Fortunately its only 60 miles to Fountain City so we should get there around 1 pm and beat the heat.

The ride was really good in that it involved staying on HWY 35 (The Great River Road) so NO TURNS required.  This HWY is well maintained with a terrific shoulder.  Weather was great with no wind though it got a little toasty toward the end.  Total elevation gain was only 1640 but there were a few annoying hills.

We decided to spend the night at Merrick State Park just outside of Fountain City.  I love being able to camp on non weekends as there were only a few people here and we got a terrific secluded spot.  Of course the routine following the ride includes checking out the town so off we went to downtown Fountain City (population 821).  We were excited to discover that Fountain City Brewing is located in, yep Fountain City and the bar that serves that beer is the legendary Monarch.  The Monarch and Fountain City Brewing was established in 1856.  It continued operation until it went out of business in the mid 1960s. The building sat dormant for years and was going to be repurposed into apartments when John, the owner, who we talked to, bought the building in 1995 and had the vision to restart the brewery.  He did and the rest is history.  He even obtained the original recipes for the beer that he said were written on a towel.  The beer was good but the corned beef was even better. 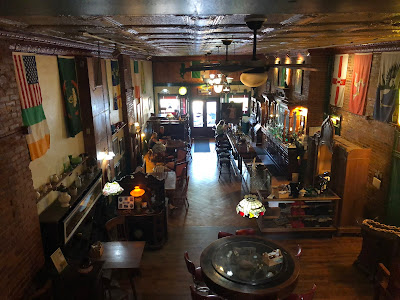 Next we hit Northshore Pub.  I noticed that the taps were all inoperable and I asked the owner, Jeff, what's up and he said he just opened the place 3 days ago and all they have is cans.  Seriously Jeff?  OK, toss me a Schmidt's, I haven't had one of those since college.  Turns out Jeff owns another bar (Bay's End) within walking distance of the State Park (well that's convenient) and used to frequent the Northshore with his dad for years and always wanted to own it.  When the previous owners retired he jumped on it.  We shook hands and told Jeff we'll give him a little more of our money at the Bay's End later this evening.

I imagine these stories are boring as hell to those reading, but I write them primarily for me to help remember years from now (actually tomorrow).  I am constantly amazed to learn about the history and interworking's of these small towns throughout America.  I just love it.  Thanks for bearing with me.

Since we didn't have the opportunity to see the world largest ball of string on this trip we wanted to see the next best thing.  The Rock in the House.  Yes Fountain City is the home of the famous Rock in the

House.  Back in 1995, a rock up the hill broke off and slammed into the master bedroom of this house.  Fortunately no one was hurt.  Believe it or not, this same thing occurred in 1901 at the SAME LOCATION and one person was killed.  Captain Obvious here but I think this is a bad place for a house.  Anyway, they left everything as is and people can come by to see it.  Here is a picture to save you a trip....

As promised we swung by Jeff's other bar, the Bays End for a beer.  What a quiet and peaceful location.  We loved it there but had to get back to hit the sack.  I have a longer ride (75 miles) tomorrow to Wilton and there are a few turns so anything can happen.