It was one month ago today that Greg and I, accompanied by Cheryl and Krissie, began the journey to Portland ME.  That was 1767 miles and many memories ago and we still have nearly 2000 left to go!  So far it has been tremendous.  The alternating good/bad riding days came to an end as I had a very good day today.  I had a pretty stiff cross wind and some significant construction the final 12 miles from Milbank to Ortonville but overall a really enjoyable ride.
It started out pretty hazy but the prefect temperature and with 4 lanes of highway much of the way, traffic was a non issue.  With Chrissy's cinnamon roll etched in my mind, we decided to stop at a truck stop at the intersection of HWY 29 and

HWY 12 and grab a coffee and Cinnabon.  The Cinnabon just didn't have that home cooked taste *sigh* (but of course I finished it).  The rest of the ride was good including some of the best shoulder of the trip, until I hit the construction.  I'm now well practiced in dealing with road construction and approached the flagger for instructions.  There was only one lane of traffic at a time allowed (fortunately no pilot car) but she told me to go right ahead on my own (uh OK, I guess).  The other times I've ridden in the construction zone I was clearly on one side while the workers/equipment was on the other.  In this case I was right in the middle of everything.  It was very awkward and a little unnerving.  I was too busy concentrating to get a picture so you will have to take my word for it. 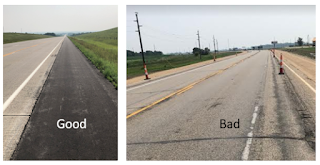 My reward for getting through the construction zone was seeing the entering Minnesota sign.  It was very exciting as neither Cheryl or I have ever been in The North Star state.  We are now in state number seven!
We arrived at the RV park early and I had some personal business to take care of.  I was on hold with customer service for 3 different companies for over an hour so I was a little cranky and needed to get out.  Cheryl and I went to the pool and met a very nice couple (Rick and Cheryl) who are nearly full time RVers and we shared RV stories while relaxing in the pool.  My spirits were lifting as we headed to Berkner Pizza (only one of two options) for dinner.  It was very tasty.

On our way back to the RV, we walked past a group of 4 sitting outside the Moose Lodge having a beer.  "Come on in and join us!" they said.  Tough for me to say no when there is beer and good conversation involved.  What a delightful group.  We sat at the picnic table and chatted for a good while about Ortonville, the ride, and things to do when we get to Minneapolis for our rest day.  It was a fun time on a beautiful evening.  I regret not thinking to get a group photo! They did invite me in to "kiss the moose" and gave me a commemorative kiss the moose koozie as a memento!  We did get a picture of that of course. Lori, who works at the local grocery store and interior paints on the side suggested that the picture get submitted to local paper (Ortonville Independent) and they run a story on our cross country journey.  Who knows I might be famous!
Tomorrow we are scheduled to ride to Kerkhoven, but we were thinking a movie might be fun and there is a moving theater 10 miles down the road in Willmar.  That is likely where we will end up.