Tough getting up this morning after the Cosmic Bingo fiasco at Mystic Lake Casino and getting to sleep at 1:30 am yesterday (actually today).   Supposed to be mid 80s in Hager City today so we needed to sacrifice sleep for an early finish.  No rest for the weary!.  I looked to Siri for a good bike route from our RV park to Hager City and she did not disappoint.  Starting in an urban area and moving into the country, I was on bike paths for a significant portion of the ride.  When on the highway shoulders were smooth and wide.  When I got out of town, the scenery was beautiful...again.  It was a very good day to be on the bike.  Being a natural optimist, when I thought about the cross country ride I always envisioned most days being like today.  The reality, of course, has been much different, but I now learn to appreciate days like today.

We entered another state when we visited Prescott Wisconsin.  In addition, we crossed over the

Mississippi River.  So strange to me that we have crossed both the Missouri and Mississippi Rivers already and so far north.  I never was good at geography (and of course my general lack of direction) but it's incredible that the Missouri River starts in Montana and we are crossing the Mississippi River up north on the Minnesota/Wisconsin boarder and they both continue all the way to the Gulf of Mexico.

We decided to take a break in Prescott.  It's a cool little town with restaurants and pubs everywhere.  It's a gathering place for bikers, particularly Harley's.  Since I still had 18 miles left til Hager City, I just changed my shoes and left my gear on.  As we surveyed the town looking for a place to eat we came across the No Name Saloon.  We decided not to go there and stayed on the other side of the street.  I'll let you guess why......

We decided on Point St Croix Marina restaurant that overlooks a marina on the Mississippi.  I was a fantastic location.  They had more drink choices than food to give you an idea of the place and we were told they specialize in shrimp.  We weren't hungry and it was too early for a beer (I rarely say that) so we decided on a couple shrimp to try and the "pizza fries" since I'd never heard of them before.  Turns out they're just cheese bread with marinara dipping sauce.  I tell you what we ordered so you have a better understanding when you see the bill that arrived when I asked to pay (cash only by the way).  I never get tired of experiencing these small town establishments. 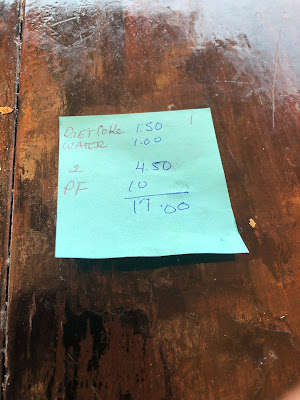 We paid our sticky note (aka bill) and moved on to Hager City.  The final 18 miles was tougher than I expected with some good climbs.  Made me happy I didn't have that beer after all.  As an aside, on our way to Hager City, we went through the town of Red Wing which is the Headquarters for Red Wing Shoes (just a little trivia for you there).
For the night, we stumbled on Hay Creek Valley Campground and Old Western Saloon (there's a mouthful) which was a unique place.  It is a gathering place for seasonal RVers, many of which had horses.  Turns out that leave their RVs here all summer a come up as often as they can and ride horses our just hang out.  They set up temporary corrals and the whole deal.  It was really quite interesting.  As we walked the park chatting with the other campers, when I mentioned I was a cyclist they said, "yep we know, we saw you come in."  What the heck? Did they send out an all RV Park bulletin when we made our reservation? 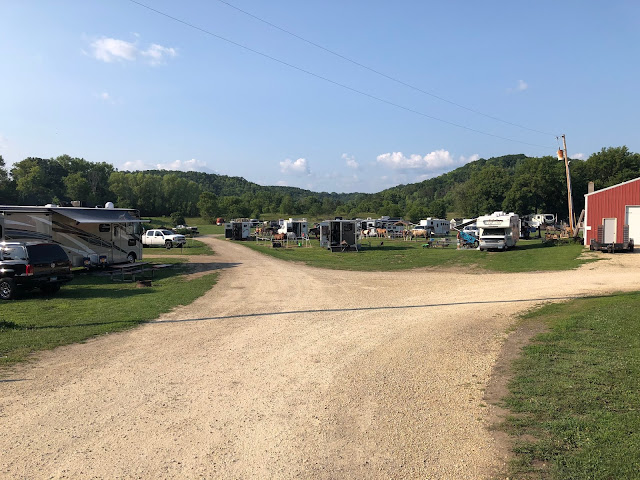 It was a great find.  Tomorrow we continue on along the Mississippi on the "Great River Road" (ie HWY 35) to Fountain City.  Making our way south east toward Chicago where we will be rendezvousing with Kyle and Casey later this week.  Sounds strange to say that as I remember sitting in a tap house a few months ago planning it with them.  Soon to become a reality!  Crazy.