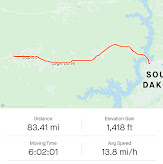 We left Faith South Dakota still itching for pizza, but it will have to wait at least a couple more days as for today, the destination is Bob’s Resort in Forest City (which includes a store, RV park and steakhouse).  Yep, looking forward to a little steak tonight.  It’s 83 miles to Bob’s and I was contemplating stopping short based on the wind situation and return to that location to start tomorrow.  As it turned out, I was able to make it all the way though, but I must say, today was probably the most challenging day so far.


The first 30 miles of the ride were actually pretty good.  I had a cross wind but I’m not going to complain as long as its not a headwind.  Traffic was light and the temperature was cool.  All systems go for a nice ride to Bob’s.

It was a very scenic and enjoyable ride for the most part and I even got a little artsy with a couple the pictures today.  To add to the the natural landscape, I also saw a turtle and a wall made out of demolished cars.  Wall made from demolished cars?  Yep, you read correctly.  Though I have not seen the Great Wall of China, I'm thinking this could give it a run for the money.  If you’re in these parts and have an urge to see a wall of cars, it’s just outside Ridgeview on HWY 212.  Can’t miss it (rumor has it you can see it from space). 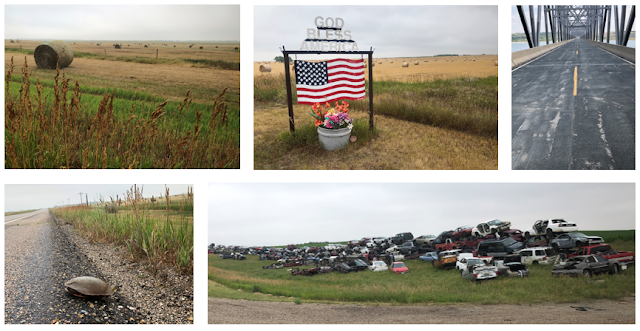 I took a break to meet with Cheryl at the 30 mile mark in Eagle Butte and then the wind decided to change direction.  Of course, it turned into a headwind. My speed went from a decent 16 mph to 13 mph in the blink of an eye.  Its not just the speed but the pounding on the body and whistling in the ears which makes the wind such a pain.  Though it was challenging, at the 65 mile break, Bob and his steakhouse was calling my name so we decided to suck it up and go an additional 18 miles so we didn’t have to backtrack tomorrow. 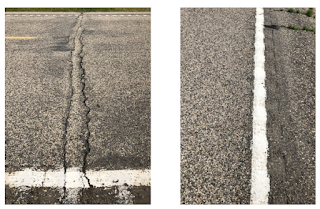 At this point, the South Dakota DOT decided to play games with me.  Keep in mind to this point it had already been a difficult ride to say the least and then two annoyances occurred.  First, the pavement had begun to separate and about every 100-150 feet there was a bump where the separation had occurred.  I've experienced this a couple times on the trip so far but this was definitely the worst.  Thump thump…..thump thump…..thump thump.  Secondly, the shoulder was non existent so I needed to ride in the traffic lane.  I tried to hug the white line to stay as far right as possible.  The tricksters at the SD DOT painted over the rumble strips (essentially camouflaging them) so if you were not paying attention you get the feel of riding a jack hammer.  Not good.  Keep in mind I had already ridden 70 miles in the wind and gave my last “F” about today's ride an hour ago so my sore butt and hands/wrists were in not in a joking mood.

We finally made it to Bobs where I grabbed a beer, turned on the AC and changed clothes.  The thoughts of headwind, thump thump and rumble strips melted away with each sip of the Michelob Golden I didn’t get yesterday.  We then put on our “nice” clothes (basically this means anything that is clean) and walked to the Steakhouse.  Bob’s Resort (“resort” is a stretch by the way) is located on Lake Oahe which is made by the Missouri River.  The steakhouse overlooks the lake and though the food was a little disappointing considering I had been looking forward to it all day, the view was beautiful.

We ended the night relaxing with some wine and watching the NBA Finals outside.  We passed out at about 9 pm as we were exhausted (or maybe because of the wine).  A nice ending to the day.

We are not exactly sure where we will end up tomorrow.  Schedule says Mansfield but it all depends on if they have a pizza place. 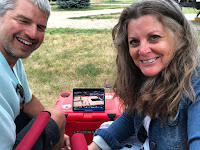