Day 21 - According to Hoyle

Every day of this journey begins with the hope that everything will go as planned.  That we will find Moody Road, that the airport will deliver the cargo on time, that no bikes will need repair.  Yet every day something unexpected happens and we have to deal with it.  That's what makes doing something like this so special and fun.  That said, it would be nice if once, just once, everything went as we expected it to.  Well today was the day (at least as close as we've come so far.)

The plan for today was to get up early and starting riding by 7:00 am so we could finish the ride before Ashland hit 102 degrees.  We would find a local place to eat then set up camp and enjoy the afternoon.  Well, as you will see below, that's pretty much what happened!  Only took 21 days.  "Put a monkey to a typewriter and it's bound to spell a word."

The ride to Ashland was 64 miles with what we thought were only some rolling hills.  There was much more traffic than expected and more of those dang rumble strips.  There was also one peak at the end of the ride that was a pain as the temperature reached 90 degrees but that made coasting into Ashland that much sweeter.

It was also nice to see some changes in the scenery.  There were curves in the road and we saw some trees!

I even had a chance to shoot a video!  Be kind, it was a single take situation.

One of the issues was that the Montana DOT decided to utilize most of the shoulder for the rumble strips so the last 15 miles of the ride was like walking a tightrope.  You could ride out in the vehicle traffic lane but I would like to finish the ride to Maine.  I tried to capture it in the picture but it doesn't do it justice.  Imagine going 25 mph and having 18 inches to ride in and if you hit a rumble strip it will knock you fillings out and if you hit the gravel you will likely tumble and get major road rash.

We made it to Ashland by 12:30 and the temperature was 93 degrees.  Hot but with no headwind like yesterday.  We grabbed lunch ad Maggies cafe.  Maggie also had Indian Tacos (tostadas to me) that looked very similar to the Oprah recognized version we had yesterday.  Hmmmm

We set up camp at Red Shale Campground.  No services but very private and since we had prepped the RV for this it was perfect.  A little warm because we didn't want to continuously run the generator for the AC so we just had more drinks to cool down.  A pretty good trade of I think.

Cheryl made a fantastic spaghetti meal and Jack and I even had time for a round of Frisbee Golf - Forest Edition (if you know you know).

All in all a terrific day that came off nearly as planned.  We are off into the vast no where tomorrow. There is nothing near where our 50-70 range is except a post office.  We may be in their parking lot but we'll figure it out. 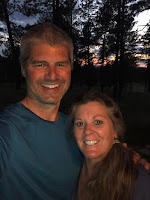