Day 39 - No Clowning Around

The bike is back together, cleaned up with new handle bar grips.  Everything is back to normal

(including my breakfast routine) and fortunately, Cheryl is firmly back in the RV driver’s seat.  Beautiful morning for a ride.  I’m finding I’m becoming a barn guy.  Every time I go by one I say “that’s cool,” “that’s a neat one,” “that would be a good picture.”  They really are fun to look at and are literally around every corner.  We have noticed some Amish working in the fields and I also saw a young boy driving his horses during my ride.  I'm getting pretty serious about some of these pictures and actually got off my bike to take them.  It was a really nice ride and fortunately it wasn’t 87 miles! 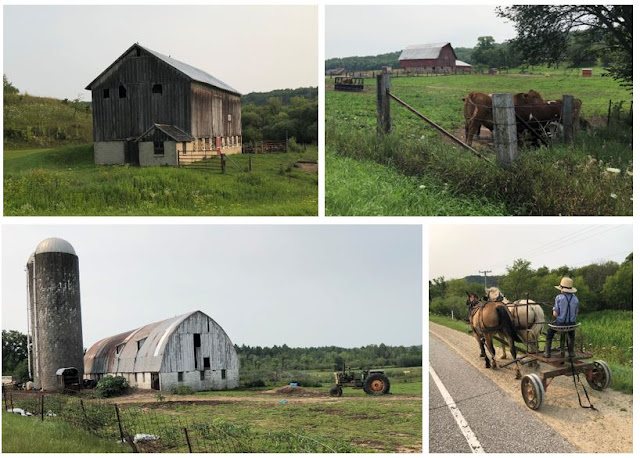 When I put together the route plan, I did take into consideration major attractions like Mt Rushmore, but didn’t get into the details on when the car show in Dayton WA was or the Rockin’ Robbins concert series in Willmar MN or Rock in the House in Fountain City WI.  We just stumble on things.  Today was no different.  Little did I know that Baraboo WI is a “Circus City” in that there is a city theme around the circus.  This is primarily driven by the fact that Ringling Brothers started here in the late 1800s where they have created the World Circus Museum.  Yes, the World Circus Museum in Baraboo WI.

We decided to set up camp south of town at Devils Lake State Park. We had a quick meeting to discuss our plan of attack focusing our attention on visiting the World Circus Museum.  The route from the state park has us take county road DF which includes a brewery, a winery and a distillery.  Boom! The trifecta!  We started at Tumbled Rock Brewery for a beer and lunch.  I had the Sarrington Road English IPA which was delicious.  While there, we discovered that the World Circus Museum closed at 4 pm so we would need to rearrange the schedule and go straight there after lunch.  As it turns out, this museum is a THING.  Shows, elephant rides, multiple buildings and they recommend 5 hours to see.  Good thing as the tickets were $20 a pop.  Since we only had an hour we decided to regroup.  I did have time to stick my head in the mouth of an alligator (or was it a crocodile), We were pleasantly surprised to learn that the Clown Hall of Fame was only a few blocks away.  You kidding me?  Clown Hall of Fame?  We’re there! 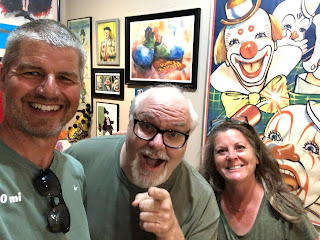 We were the only people there (surprise) and were fortunate to receive a 1-1 tour by Greg the manager of the museum (a clown himself for 30 years).  He was very pleasant and knowledgeable, and Cheryl and I learned a lot about clowning and had a wonderful visit. Did you know there are only three types of clowns?  Look it up!  Greg also mentioned that there is a Ringling Brothers Brewery around the corner where beers have a circus theme.  We were excited to check it out but unfortunately it is closed on Monday and Tuesday.  Damn, that early week closure thing again. I was so looking forward to my Strong Man IPA or the Bearded Lady pale.

It was pretty hot and we didn’t like leaving Zuri in the RV so we decided against the winery and distillery (shocking I know) and went back to the State Park.

We had a delicious dinner of chicken tacos and watched the Bucks win the NBA finals then it was time to get some rest for tomorrow. Heaven knows I need it!  Heading to Dayton WI.  Not sure what surprises wait for us there, but I know it will be something.