Today started like any other day except for one thing.  Can you tell what's different from the starting photo?  If you guessed spare front wheel you are a winner.  Why do I have the spare front wheel on you ask?  Well..... yesterday, when we set up camp, I moved the picnic table into the shade near the RV as I wanted to work on the computer outside.  When we returned from dinner and I was backing into our spot, I backed into the picnic table!  Not kidding.  Idiot move!  Of course the bikes were on the back and there is nothing like the sound of a bike getting crunched.  The front wheel of my primary bike hit the table and fortunately only bent the rim a bit.  Could have been much worse.  Ugh!!

That's why I carry a spare (though thinking for a different reason) so I swapped out the front wheel and I'm ready to roll.  Cheryl will ride ahead to Onalaska where they have a bike shop who can straighten it out.  I'm so mad, but hey, I can't cry over spilled milk.

As I mentioned, Cheryl went ahead of me and door busted the Coulee Bicycle Company in Onalaska.  Robbie and Danny didn't hesitate to jump right on getting the wheel straightened out.  Coincidently there was a dog grooming shop next door and the wheel was fixed before Zuri's nails were trimmed.  I showed up a short time later and was pleasantly surprised the wheel was repaired.  Thanks sooo much Robbie and Danny.  You are awesome and saved me today.  I'm still an idiot, but back to having two working bikes again.

Overall today's ride was longer than anticipated (huge surprise there).  I was expecting about 74 miles but when I looked more closely at the route, much of it was on gravel which I DO NOT DO!  So the detour cost me an extra 13 miles.  I was also surprised at 2600 feet of climb.  It was great riding though, especially the last 20 miles. 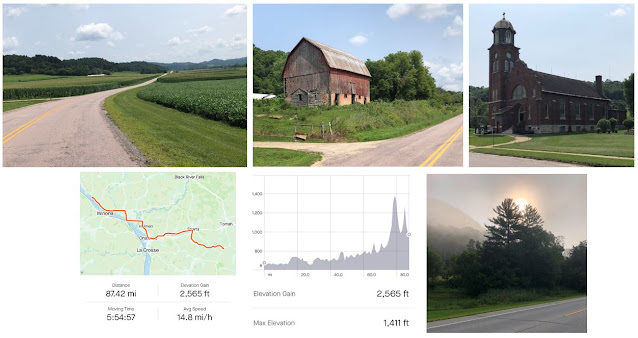 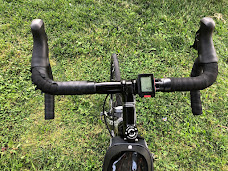 We arrived at Wilton WI (population 510) about 2:30 pm.  We didn't spend a bunch of time in town because Wilton took a page out of Martinsdale's book and 2 out of 3 places were closed on Monday.  We had a nacho and beer from Hillsboro Brewing (Wisconsin not Oregon) at the Hitching Post then back to camp.  I felt extremely guilty about damaging my bike so I decided some TLC was in order and I replace the handle bar tape, cleaned up the mechanical and wiped it down.  I hope I'm forgiven.  The handle bar tape was a going away gift from my coworkers.  Looks great and thank you!!  The picture only shows one side but I did do both.  Trying to be cleaver and going for the before/after effect in one picture.

Pretty quiet night and I'm a little tired!  Tomorrow should be shorter (54 miles) as we head to Baraboo WI.  I'm going to let Cheryl back into our RV spot.