OK, sit down, grab your favorite beverage and get comfortable because we're going to be here a while. Last night and today were insane and I didn't give you the full story yesterday so I need to fill you in today.
So lets get started. Here is the traditional beginning of the daily ride picture. Look closely at the picture and what do you see that is different? Greg in the yellow coat? Good start. He was smart like me and dressed warm. The Wal Mart shopping cart? Yep. We were in a very sketch part of Eureka CA where we learned thousands of shopping carts are stolen each year by transients and meth addicts.  Keep going.  My watch says 11:30 am?  Excellent. You are very observant. We got a late start this morning. One more. Look closely. You got it!  Greg is riding a different bike!  Well done.  These changes will all be answered in today's entry so read on...... 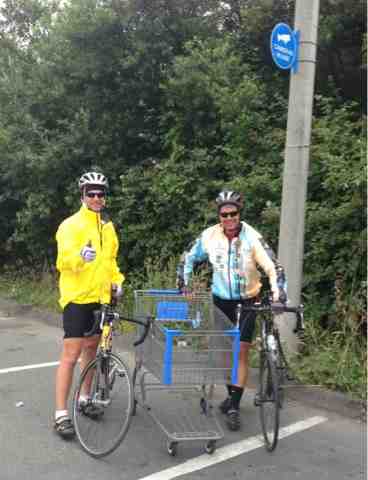 It all started last night when we decided not to ride any more following our nice dinner with John and Vickiy. Since it was late and being cheap we figured we'd forgo the RV Park and just hit the local Wal Mart. Besides, no Winkler RV trip is complete without a night in a Wal Mart parking lot. So we just parked and started settling in and casually left the bikes leaned up against the RV (temporarily) like we have done many times before. Well a mall cop came by and mentioned that we can't stay the night in this particular Wal Mart because the land is owned by the mall but the K Mart down the road lets you stay there. Wal Mart, K Mart, hell they are all the same to red necks like us so we thanked him and proceeded to pack up and move on down the road. The only problem was that we noticed Greg's bike had been stolen!  In the few minutes we were there someone literally walked up to the RV (it was still light out) and stole the bike. We were in shock.
So we notified the mall cops to see if they had anything on camera. They were a huge help.....NOT! We also called the police and filed a report. We learned that the field on the other side of the hedge from the Wal Mart is one of the biggest transient and meth "campsites" in California and I parallel parked right next to it (I did a really nice job parallel parking too)
Here's the hedge and of course shopping carts. 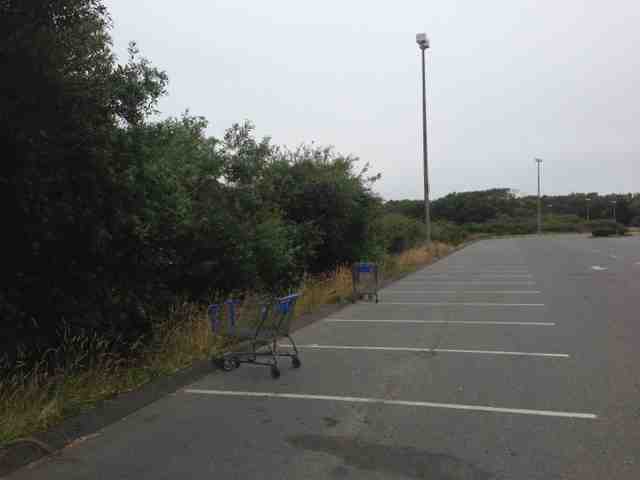 Needless to say we were all pissed but I was really mad. I was about ready to cross the hedge and go all Liam Neeson on their ass and show them "my unique set of skills."  Cooler heads prevailed and we decided to go all CSI - Intruder on'em. So we went to Kinkos/FedEx and printed some pictures of Greg's bike and distributed them to all the pawn shops in Eureka (the trap was set).
Greg finishing up the flyers 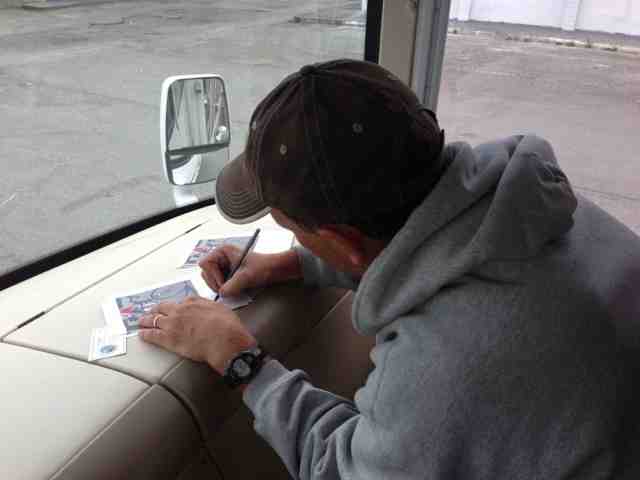 In the a pawn shop setting the trap 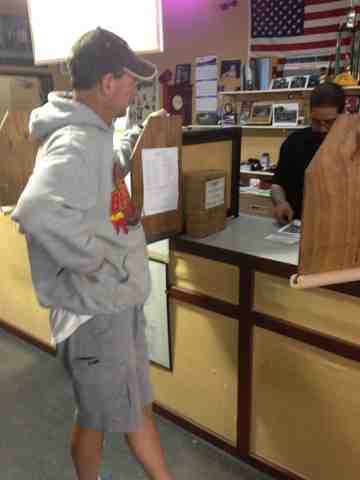 So what do we do about riding to San Francisco?  Well even though our good to bad decision ratio is about 5% on this trip, one of our best decisions was to bring a spare bike. Spare bike?  Yes we have a spare bike. The night before the ride we were having a beer (surprise) with some friends and discussing spare bike parts in case of a catastrophic failure (wheels, chain, crank etc) and Krissie's brother Rich said "heck, just take the bike out of our shed and use it as a spare" SOLD! (spare bikes..... not just for the professionals anymore). So that's how we got it. Even though Cheryl is the MVP of this trip, Rich and Janelle get the sixth man award for coming up huge off the bench.  Many thanks you two! 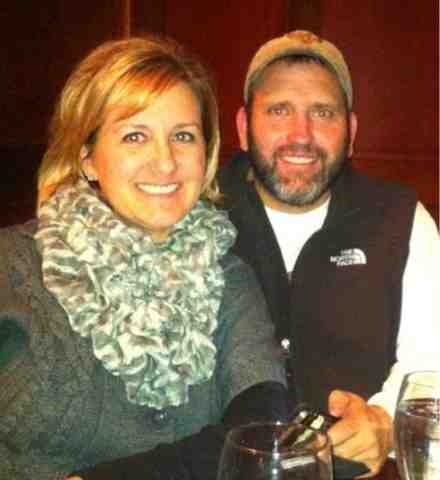 So we did a quick tune up on the bike and Greg was ready to roll. So that's why we didn't get started until 11:30 am because we had flyers to make, pawn shops to visit and a bike to get ready before we left the Eureka "Hell Hole."
Once on the road this was actually one of our best rides. We got in 74 miles with 4500 feet of climb and the spare bike worked like a champ. 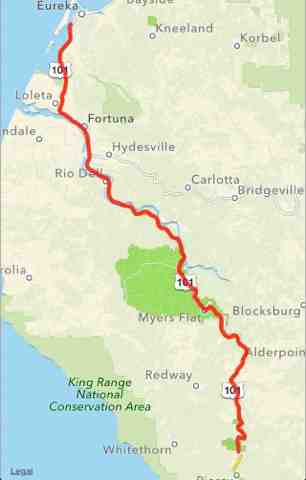 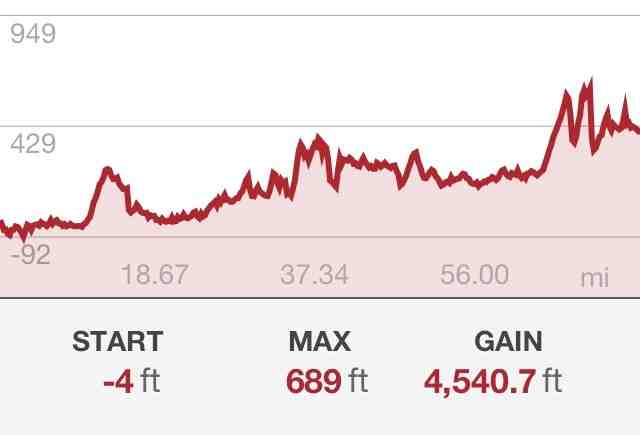 We got back to some beautiful scenery. I loved riding through this redwood grove.

So here's the kicker......as we pulled into camp Greg had a message on his phone from the Eureka Pawn Shop saying some one tried to pawn the bike and the police have the bike and the culprit was arrested. Gotcha you little SOB. The CSI - Intruder plan worked!! (though I still would have liked to go Liam Neeson on'em).
So we celebrated at the Richardson RV park with a nice BBQ and of course......... a beer. 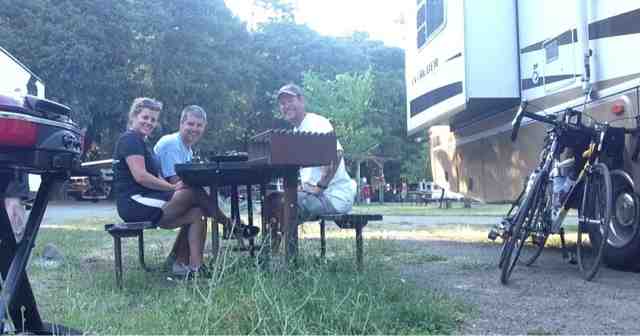 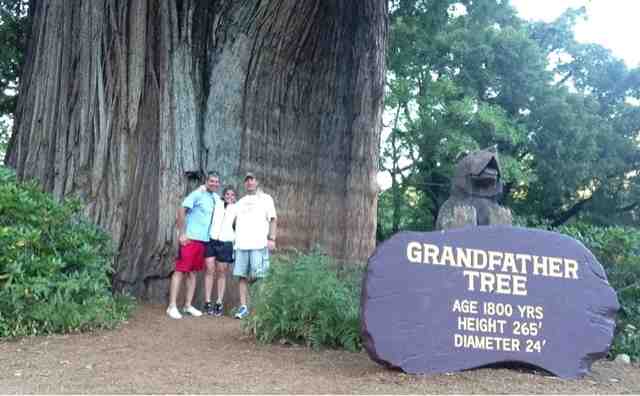