Day 9 - Catching up in Kamiah

Had a big ride ahead of me today.  71 miles to Kamiah ID up HWY 12 along the Clearwater River.  I checked the route and it looked a little squirrelly getting out of Lewiston, especially because there is a nice riverside bike path that I want to intercept that was a little confusing (well, for me any way).

So off I go, on the road before 8 like I had planned (7:50 to be exact).  Everything started fine but as expected I got a little turned around where the Snake and the Clearwater come together and when I hit the bike path I could go left or right.  I
should have gone right and of course I went left.  I was cruising along with the nice Snake River breeze in my face, but the problem was it should have been the Clearwater breeze.  Of course I didn’t have my navigation turned on (I know, I know) and when I did Siri immediately said “in 100 feet take a U turn.”  Ugh, this is getting ridiculous.

The bike path was initially amazing, but after about 2 miles, every 30 feet the asphalt was separated by about 4 inches with grass growing in the crack, but the problem was the “thump, thump” of my bike each time.  This was extremely annoying, so I decided to hop the guardrail and ride HWY 12.  Talk about jumping from the frying pan into the fire.  HWY 12 outside Lewiston SUCKS big time.  The road surface is chip seal and it feels like I’m sitting on a jack hammer as I ride.  I’m on HWY 12 for 71 miles (actually closer to 74 thanks to my initial left turn).  There is an 6-12 inch sliver of nice road where the chip seal did not reach so I could ride the jackhammer or play cat and mouse with the guardrail while I ride to smooth portion, choose your poison.  Fortunately, this lasted “only” about 15 miles to where HWY 12 separated from HWY 3.

The riding conditions were still not terrific in that there is very little shoulder and a lot of trailers and fifth-wheels.  As with yesterday, the scenery was very beautiful.

I did have another encounter with road construction and one-way traffic but this time there was no Kathleen to keep me from my continuous route.  It was controlled by a traffic light.  As I approached the light, I instinctively moved up to the front on the right side of the line of cars.  The problem was that when the light turned green and I entered the single lane there was no shoulder on the right and jersey barriers on the left so cars could not safely pass me.  Yesterday in the pilot car with Kathleen I had the power.  Today with 12 cars behind me on my bike I felt powerless.  I cranked up the gear and sprinted for what seemed like 3 miles but was probably 0.5 miles, but I got through it and no middle fingers from the line of traffic behind me.

The rest of the ride was fine and we arrived in Kamiah ahead of schedule so we decided to take a quick dip in the Clearwater River.  About 1 second and some major shrinkage later, I was back on shore ready for a towel and some lunch. 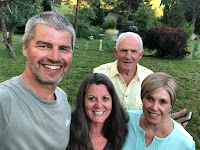 Kamiah is the home of a legendary Idaho basketball coach, Fred Mercer.  I met Fred when I worked his camps while playing for WSU.  I would work a couple days of camp then we would float the Clearwater.  We had some terrific times.  Cheryl and I paid Fred and his wife Judy a visit and we talked and laughed into the late evening.  It was a lot of fun seeing them and catching up.  Thanks Fred and Judy for the hospitality (and the parking spot in front of your house)!

55 miles tomorrow further down HWY 12 but not exactly sure where we are staying.  Oh well, we’ll figure it out when we get there.  Another hot one but I’ll be up and out early. 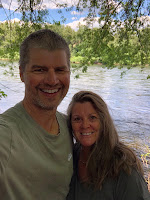 Until then……
(this is before the jump in the river and I was still smiling)
Posted by Chris at 6:52 AM