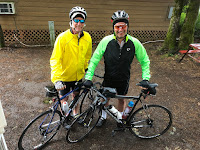 Day 3 and the team is not as fired up as yesterday.  We were expecting rain but thought it was a one and done thing.  But today is supposed to be worse than yesterday and the thought of putting on wet shoes, knowing it will only go downhill from there.  Probably the wrong metaphor since we know there is plenty of climbing today.

But as typical for this team, we rallied.  Cheryl made some terrific breakfast sandwiches and we cleaned and oiled the bikes, a little Chamois Butt’r and BOOM! we were ready for the world.  I decided to ditch the three sizes too small Tyvek and went back to my windbreaker.  I’m not sure if it is water proof but I am hopeful.

The route should have been pretty straight forward, Old Columbia HWY from Cascade Locks to Biggs but it didn't quite turn out that way.  We started the day with a beautiful mixture of trails and light traffic highway.  If you have not taken Old Columbia Hwy 30, you need to.  It is extremely beautiful.  Some of that beauty gets lost on us as the mixture of sweat and rain gets in our eyes but it's amazing. 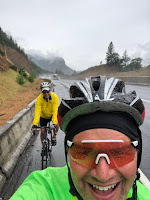 The first glitch came about 5 miles outside of Hood River when we checked the route we have been using from the Adventure Cycling Association (ACA).  The trail we were on dead ended at Ainsworth State Park and only way East was on Interstate 84.  Um, that can't be right, can it?  Yes it can, and it was.  6 miles of terror in the pouring rain with "Oversized Load" tractor trailers zooming by at 65 mph.  Not to mention the rocks, shredded tires, rusty nuts, urine filled water bottles, you name it's on the shoulder.  Did I mention getting drenched from the wheel spray? (Look at the truck coming up behind Greg in the picture, not good)  We some how survived that and took a short break to let our heart rates slow and figure out how to get to The Dalles and meet Cheryl and Krissie for lunch. By this time, I had the answer to my question about if my jacket was waterproof. 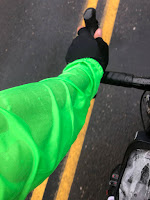 turned to heavy rain.  Pictures don't do it justice so I have a treat for you and took a video.
After about an hour outside Hood River, the rain let up and the sun peaked out.  Just in time for us as we hit Rowena and the lookout.  Absolutely GORGEous  (see what I did there?).  By now our spirits were climbing, just like the trails we were on.  The clothes were drying out and after a couple minor setbacks (Riverfront trail was closed) we made it to Riverfront Park with lunch with Cheryl and Krissie. 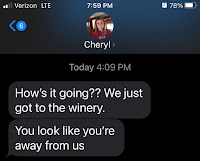 The final push for the day was to Maryhill State Park just across the river from Biggs junction.  The ACA route had us going back on 84 and this time for 10 miles.  With the PTSD from a few hours earlier, we wanted to avoid riding on 84 at all costs.  So we pulled up Google Maps and found another route that was 5 miles longer but looked great and avoided getting on 84.  That is where things started to unravel.  We headed out on beautiful hwy 182 (known by the locals as Fifteen Mile Road).  Absolutely perfect riding.  No traffic, nice pavement and beautiful scenery.  We were supposed to take a left at Moody Road but somehow we missed it.  We were just riding and talking having a wonderful time.  After about 5 miles we got to thinking that we missed Moody Road and should check out the map on our phone.  Ooops, no cell service.
Ahhh that's OK we will find another road.  We feel good.  About another 5 miles passed and we started to get a little concerned.  We'll just ask at the next house.  Problem was, there wasn't a next house.  We were out in the middle of NOWHERE!  Cheryl and Krissie follow our progress on the Strava app and even without us having cell service they could still see us.  They wanted to do a little wine tasting at Maryhill winery and they knew what was happening and just like that bad horror moving where you know the teenage kids are walking into the old cabin where the 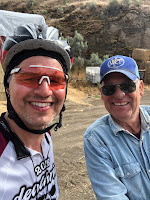 axe murder is, they were powerless to stop it.  Cheryl's texts were not received.

Greg and I finally flagged down a pickup truck and the look on that farmers face, seeing these two guys in their cycling gear completely lost was priceless.  His name is Bill Hamel and he could not have been nicer.  He told us we were on our way to Bend not Biggs and offered to have his hired hand (Jake) get us a ride back to Moody Road.  That was great until we got to Moody Road and saw that it was all GRAVEL.  Jake, being just as nice as his boss Bill, continued being our Uber driver until we hit pavement.  From there is was about 8 miles to Biggs and after another 10 minutes of terror going over the bridge at Biggs junction (no shoulder and 18 wheelers!) we finally rolled into Maryhill State Park.  Sheesh. 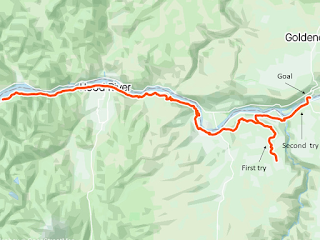 Of course Cheryl and Krissie were not overly excited about the days events and wondered if Portland ME is possible considering The Dalles to Biggs was not.  I assured them that we are still working the kinks out.  That's my story and I sticking with it!  Portland ME here we come!!!

The weather is looking fantastic for the next few days and the spirts are high.  Tomorrows ride "should be" only 58 miles (at least that's what Google Maps says)