After yesterday were are hoping for a straightforward day.  Get up, ride, get tired, drink a beer, eat, drink another beer, go to sleep. After a minor problem with draining the RV tanks (a slight leak in the hose) we were ready to roll.  Everything started great with Jack on his own bike (yea!), Craig on Skips bike (thanks Skip) and me with my bike.  The spare was happy to get some fresh air yesterday and we were thankful for its service but its back on the rack hopefully not needed again.

Craig’s plan is to ride with us until the White Sulphur Springs turnoff then head towards Great Falls.  Jack and I will continue to Martinsdale.  It’s a 66 mile ride with 3100 ft of climb.

The ride started out terrific heading into the mountains.  It was, cool, no wind and light traffic.  The scenery was beautiful until we came to the area of the Deep Water Creek fire a week ago.  Sad to see the burned landscape.  Once over the hill we reached the plateau and I’ve got to tell you, I was expecting a lot of open space in Montana, but not this much open space.  We turned a corner and saw a 2 mile straight away.  Turned another and saw another and another.  Montana is huge (I know, Captain Obvious).  We saw a lot of cattle both in the fields and in trailers.  One truck and trailer came by at about 80 mph (not sure the speed limit for semi’s but this dude was not obeying it).  I got covered with manure laden straw from its slipstream.  Not good.  On the last leg for the day, I noticed cow manure all over the road.  I said “Jack it looks like there was a cattle drive on the road.”  The further we went the “fresher” the manure became until I hit a patch that splattered on my leg.  OK, leaking sewer hose, manure straw to the face, manure splatter on my leg.  This has become a shitty day.

Soon after the splatter, we turned the corner, and this happened………


After working our way through the cattle drive (I can't believe I just wrote that), we were on the home stretch to Martinsdale.  As if the climbing and long rolling straight aways wasn’t enough, the biking gods giveth yesterday with a tailwind and taketh away today with a tough headwind for the final 20 miles.  Overall it was a good but tough day.  Thank you Jack for pulling me through it. 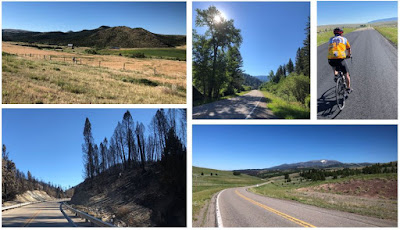 We were expecting to dry camp in Martinsdale (population 26 – not a misprint) but heard there was a nice restaurant and pub (no store or gas station).  Turns out both had signs that read “closed on Monday”  The only business I could find open was the post office and the nice lady in there said, “Sorry, you shouldn’t have come to Martinsdale on a Monday”  (who’s Captain Obvious now). 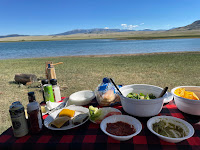 As it turns out there is a campground on the Martinsdale Reservoir and it was great.  The site itself was nothing special but being next to the water, with NO ONE around with a spectacular view lifted our
spirits. We had a great BBQ dinner and even built a fire (I actually used an hatchet to chop some wood) and made S’mores.  Fantastic end to a “shitty” day.

Tomorrow we head to another small town Lavina.  Hopefully Lavina is not closed on Tuesdays. 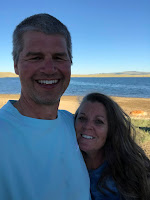