We are entering the second to the last day of Cycle Oregon 2022 and what and amazing experience. Of course Steve Schulz and the CO organizers couldn’t ease up on us and we had a 78 mile ride from Mitchell to Dayville with 3900 feet of climb.

That’s OK. The way we’ve been eating (and drinking) we need even more miles to keep our weight down. We started the morning with the usual breakfast but this morning they added hockey pucks, sorry, I mean waffles. Overall, the food has been very good,  but today someone overcooked the waffles and they were as hard as the rocks we’ve been riding through. Of course I want the calories for the long ride today so I just soaked them in syrup and ate them like a cookie.  Not bad actually.

The ride took us though another beautiful route.  I probably took 30 pictures but broke them into 3 Categories: 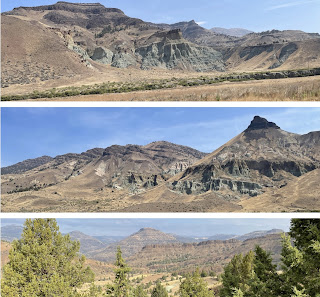 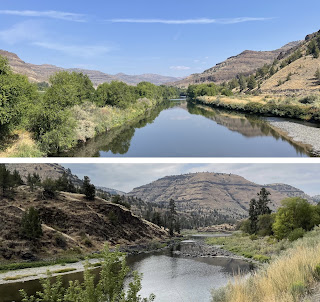 Barns (just for you John) 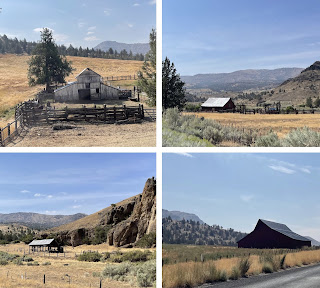 I’ve mentioned food and calories a lot in this blog and that’s because they are an important part of the week. You are either taking them in or burning them.  CO is a well supported ride, especially in the rest stop department.  Today I think we had the best stop so far. We hit the trifecta 1) by the river 2) band playing 3) variety of food.  Over a long period of time it’s easy to grow tired of the same refueling food (PB&J, protein bars etc). This stop had large variety including pepperoni sticks and Doritos!  I found a piece of heaven next to the John Day river. I had 4 pepperoni sticks. (they were small!) 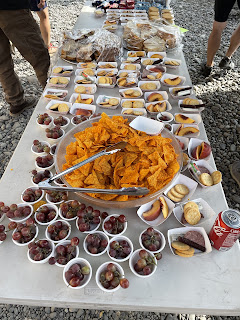 Though it was a lot of miles and climbing, it wasn’t too bad physically.  Either I’m getting into shape (which is highly unlikely) or I was just too taken with the scenery to notice.

Dayville is another “small” rural community but just as welcoming and delightful as the others we visited on this trip. Our camping area is a huge, flat, grassy pasture that we are apparently borrowing from a local farmer. It’s the best location so far.

We were strongly encouraged to walk to the Dayville Cafe and have a  slice of pie so of course we did (more calories). There were multiple flavors (many already sold out) but I had the pecan which was delicious.  Regarding that calorie thing, I bet there was 1000 of those babies in my slice. 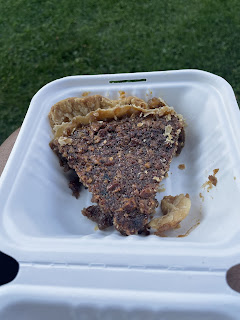 Since it is our last night together, I pulled out the Honey Whiskey I’ve been lugging around for a week  and our group had a toast to acknowledge and celebrate the wonderful time we have spent together.  Cheers! 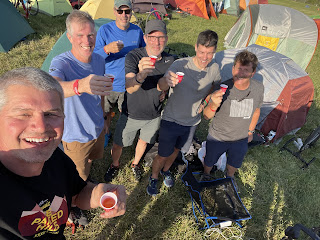 After dinner we continued the nightly routine of listening to a local band and hearing the announcements from Steve and his team.  Of course multiple trips to the beer/wine bar are included in the routine.  It was a special night in that I successfully punched the two cards I purchased this week. Charity (one of the servers who has been here all week) joined me in celebrating this monumental occasion. I’m not going to tell you how many punches are in a punch card so don’t ask. 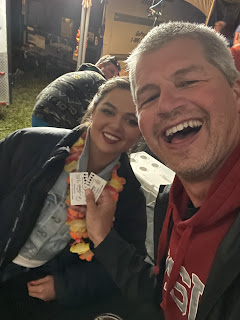 The group tonight was The Holly Sorenson band and they were terrific.  There was a debate as to if they were the best yet. It’s a tough call. 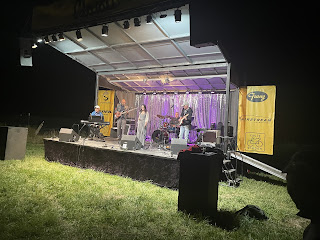 Well, the last night of Cycle Oregon is over and tomorrow is our last ride. Some of our group is already committed to the long route but for Jack and I, it will be a game time decision.   The pull of finding a place to watch football is pretty strong.