It was not the most restful night in my life to be sure.  First of all, I under estimated how chilly it was going to be (yes I have the weather app) and had to add a couple layers of clothing right out of the gate. Then there was the squeaking of the air mattress as people shift positions, the zipping and unzipping of tents as people got up to use the porta potty. There are people within 10 feet in all directions and they make the craziest noises at night!

The morning was as expected for a first day. Lots of hustle and bustle and the nervous energy about what was to come riding through the painted hills. Of course breakfast was the first order of business and Cycle Oregon did great. Eggs, onion potato’s, bacon and oatmeal as the main offering. There was a second buffet with toppings. There was cheese and salsa and what appeared to be sour cream so I piled it all on my eggs for a little Mexican flair.  As it turned out it was not sour cream but yogurt. I guess my first clue should have been that it was between the granola and bread pudding. Hmmmm, eggs, salsa, cheese and yogurt. The breakfast of champions.  I ate it all as I was too embarrassed to admit my mistake.  Don’t expect this recipe on the Food Network anytime soon. Yep, yogurt right in the middle! 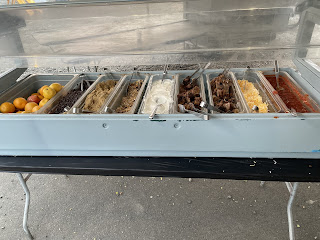 After breakfast, I completed what is now the routine procedure of parking lot tooth brushing while waiting at the porta potty. I then headed back to camp to tear everything down and get packed up so we can hit the road.  I was pretty proud of myself as I was packed up before everyone else then I turned around I realized I didn’t put that  roof thing away. Damn. I also left the tooth paste tube in my pocket. Worst of all I forgot to put on my Chamois butter!!   No slippin’ and sliding for me today.  I’ve got to get the routine down. 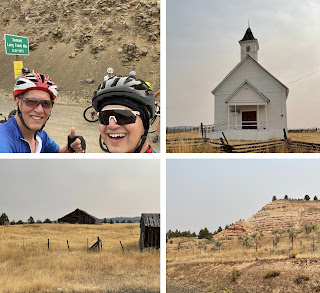 Overall it was a nice ride at 60 miles, 3800 ft of climb and wonderful scenery. A little hazy but beautiful nevertheless.  Seven of us started as a group but it quickly became apparent that 6 of the group were doing their best Tour de France impersonation so I stayed back, kicked in an 80s playlist and I was good to go!  I eventually ran into Ed (one of our group) and we summited Long Creek Mountain together.

The route was well supported and all the riders and staff were super nice.

As I finished the ride I ran into Oregon State fan Frank from  Portland sporting a Beavers jersey. Just a reminder Greg, this is what it’s supposed to look like. 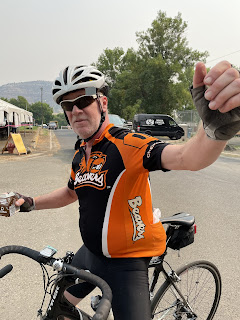 We spent the night at the high school in the metropolis known as Monument (pop 120). The people could not have been more welcoming. There was even a cheering section of local kids when we finished. 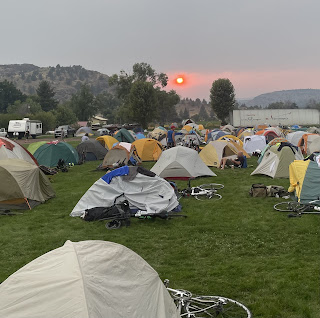 Camp set up was much easier today though I was definitely tired.   After a shower, it was beer thirty. Felt awesome to kick back and sip an IPA (or 4) after a long ride. My kind of hydration. They even have RPM!  I was a little early with my Mexican flair this morning as for dinner we had fajitas. I didn’t find any yogurt though.

Listening to a band out of La Grande named Elwood finished off the night. They were awesome. It may have 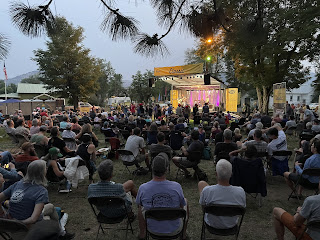 been the RPMs I think they were good. Need to see if they have any Portland dates on the calendar.

All in all a wonderful Day 1. We are off to Fossil tomorrow. 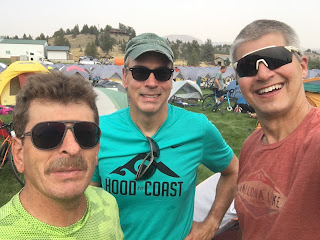