Day 3 - stick with the primary route

We are staying in Fossil a second night so todays ride is an out and back. The primary ride is 40 miles and 4000 feet of climb while the extended route is 56 miles and 6500 feet of climb. More on how that turned out a little later.

Before we get into the day, a little background on a couple inter workings of Cycle Oregon. First, there is the passport. You get stamps for every city you visit. I get the idea and I’m even participating but there is really no point as there is no prize at the end or anything. I am afraid it will be just another “thing” we have in the memorabilia box in the garage. I do think I’m going to keep it though as I’m SURE the kids will fight over this when I pass away. Can’t wait for the Mitchell stamp tomorrow (I’m sure the kids can’t either 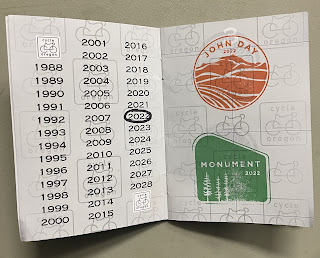 The other creative idea to build a sense of community is personalized license plates. I like it because as you approach someone you know their name and can call them by name as you pass. Some riders have unique names like Thunder Pedals or Cycle Master while most put their first names and town but dress it up with flowers or something. Being the highly creative person I am, I came up with the following: 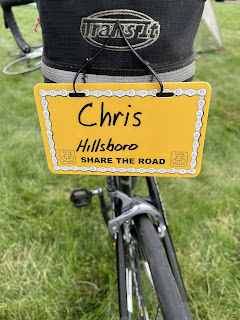 I must say, it has worked. There has been no miscommunication on who I am or where I am from.

So about today. Our group agreed to do the primary ride and take it easy today. I admit I was in the conversation and supported it. The thing was, as I approached the halfway point of the primary ride, it was at the bottom of the hill and I felt great. Since I typically ride alone (remember my group is much faster than me) I didn’t have anyone to consult with so I continued on the extended ride. I figured I’d just go a couple miles up the hill and turn around. Yea right. I’m no wuss, (Dad voice) “once you start something you need to finish it!” So of course I did and as I approached the finish of the extended portion I was really tired and thought “bad idea, I still have the huge hill from the primary route to get back to Fossil”  Well I eventually made it but it was not easy. I was moving so slow I almost fell over. Final tally, 56 miles and 6506 feet of climb. I was completely spent. 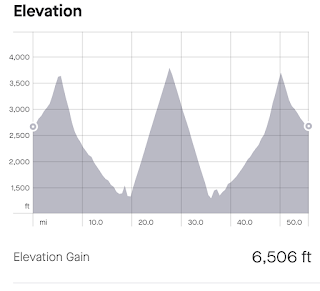 It was a very beautiful ride. We got some rain last night and the wind changed directions so it cleared up and visibly was much better. 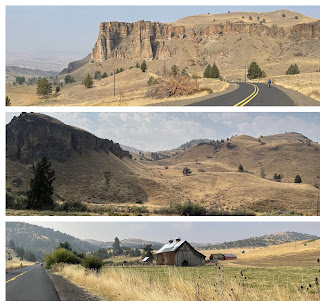 A little time relaxing and a shower and I was ready for the evening activities. Top on the list was steak dinner with baked potato. It was very good. Then it was over to the stage for some refreshments (beer), music and announcements about tomorrow.

A little detail about the announcements. Every night at the concert, Steve Schulz, the executive director of Cycle Oregon talks about the days ride and introduces local officials, recognizes volunteers and talks about the next days ride. Since an important part of this section of Oregon is the beauty and history of the rock formations we get a geology lesson from Ian Madin, former geologist for the state of Oregon. It’s really interesting though I completely forget everything he says 5 min after he says it but I wanted to recognize him here. The riders love him. 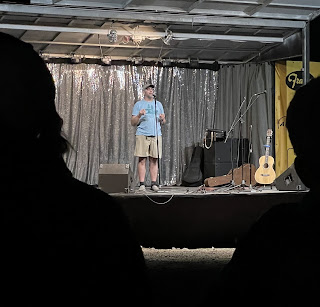 As we waited for the rest of our group this morning, I got a picture with Jack my brother in law who many of you know turned me onto cycling.  As I looked at the picture I was reminded of a year ago when Jack joined me on my coast to coast ride and a picture we took in Eastern Montana as we reached the end of another major climb. 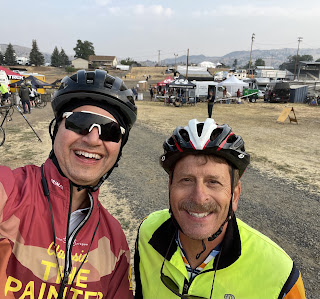 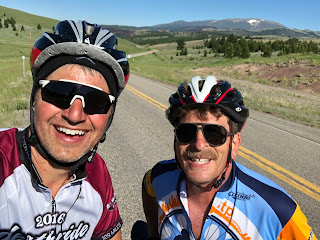 I want to thank Jack for the invitation to join him and Craig on this ride.  It’s been terrific (well, excluding todays extended ride).  I don’t think of you as a brother-in-law, I consider you a friend.  Thank you.

We pack up the campsites tomorrow and head to Mitchell. Ian assures us we will see some amazing rock formations.  I can’t wait.
Until then….