It’s been over a year since I logged into the blog. It’s been quite a year at that. A lot of amazing things have happened (Grandkids? New in laws?  New job?  Heart procedure?). I’m so blessed (well maybe not the heart procedure). But I’m not one to just blog about my daily life and the cookies I baked this afternoon (do I even know how to bake cookies?) I like to share experiences and I’m off on another one. This time it’s Cycle Oregon 2022!

As a reminder, during my coast to coast trip, Jack and  Craig joined me for a very difficult portion of the ride traveling through Montana. Bike trouble, blistering heat and miles and miles of…..well…..not much. They helped me get through it for which I am thankful.

Then, this past February, Jack calls and says “Craig and I are doing Cycle Oregon.  Get this, we’ll drive 6 hours to John Day, sleep in tents and use porta potties.  It will be awesome.  Come join us”  Though you all know I’m an RV guy, with a mattress and bathroom, but what am I going to say?

So today is the first of seven days of riding in eastern Oregon. So sit back and get comfortable, because I can’t as I’m laying on an air mattress in a tent (Im kidding. I’ve had a couple beers so of course I’m comfortable)

The day started at Craigs house where we all met to load up the bikes and gear. The rules say you only get 65 lbs in one bag only and I’m panicked because I weighed in at 66. Of course Jack comes in at 35 and Craig at 50. So I’m already “that guy.”  Oh well, they’ll thank me when they want some of the honey whiskey I brought.

We were fortunate to catch a ride with Allen and Brian, two experienced Cycle Oregon riders in an amazing van. Things are starting off well. 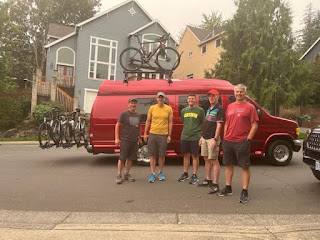 We are off to John Day, only 6 hours away. The gorge was awful with heavy cross winds and smoke from the fires. Allen was awesome in keeping the van between the white lines. Well done Allen!

For lunch we wanted something “unique” so we hit Beachwoods Eatery and Lounge in The Dallas. It hit the mark for unique with special names for the dishes and bacon served with nearly every item. Interestingly, the selections were often named after people. The Vicki, The Austin, Tiffany’s Veggie. You get the idea. The food was very good though. 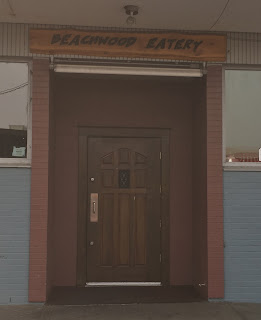 Of course it is Saturday afternoon and I’m trying desperately to watch the Cougs beat the ranked Wisconsin Badgers on my phone but since we are out in the middle of nowhere I spent more time watching the buffer icon than the game but it was all good because the Cougars won!!!!

We arrived at the John Day fairgrounds with 1500 other riders and it was terrific from the start. High energy volunteers, food, a band and best of all, beer!  I am also happy to say, the tent when up without a hitch. 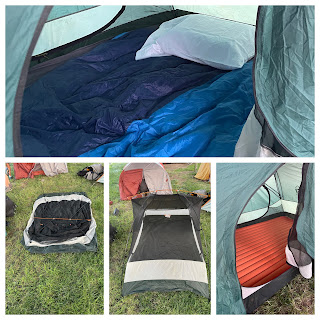 We listened to the band for a while walked the grounds (I got my Cycle Oregon Passport stamped) and decided to get ready to shut it down. Getting ready for bed was a little different than the RV. I brushed my teeth in the gravel parking lot outside the porta potty and washed my pills down with my water bottle in the tent. I even have my brace for my Plantar Fasciitis so mission accomplished. 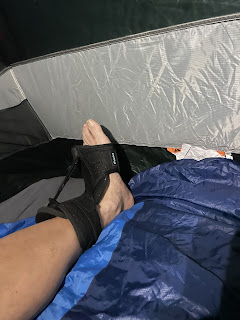 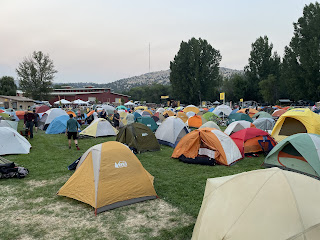 I am really looking forward to the week ahead. 60 miles through beautiful eastern Oregon and thankfully I don’t have to carry my 66 lb bag.

Until then… (I hope I get cell service!)