Our final day on the boat started at 5:30 am this morning because Alexi had a "special treat" planned for our first dive. We were going to dive the Batu Tiga site. Apparently this site is very difficult to reach so of course we are going to attempt to reach it since we have not been challenged enough already. It consists of a cauldron that can only be accessed by decending outside the cauldron and swimming through rock overhangs that are almost like caves (yes you read correctly).  The underwater currents are so severe that the only time it's possible to even attempt the dive is during a slack tide (the period between tides) and that occurs this morning at 6:00 am so we needed to be geared up and ready to jump in the water at that time. Of course a negative entry is required and we will be decending to 30 meters again, only this time there is a twist. Once we reach the bottom we will need to hang on to the rocks and PULL ourselves against the current through the rock formations because if we don't hang onto the rock, the current will sweep us away. Does this sound like a "special treat" to anyone else? Certainly not to me. A cappuccino and doughnut would be my idea of a special treat.
After hearing the briefing Cheryl and I were very uneasy about participating but reluctantly agreed to join the group. That damn peer pressure thing again.  We all boarded the dive boat together for this dive because Alexi would make a "game time" decision for the entire group as to whether the currents would be light enough for us to make the attempt and we all needed to jump in within a few minutes of each other. Doug, Cheryl and I would go last.
The sun was just peeking above the horizon to the east as we reached our entry point. Alexi jumped in to evaluate the current and gave the group the OK sign that the dive was a "go."  I think I was supposed to be excited we were actually going to attempt to reach this special place, but part of me was hoping we could go back to the boat for that cappuccino and doughnut.
The first two groups plunged backwards into the water and were quickly out of sight as they performed their negative entry. Our group was now on deck. I remember thinking that the mood on this dive was very business like and each dive guide was much more deliberate in their instructions and it felt like it was "game on."  With our safety checks complete and all equipment working, we emptied our BCDs and our lungs and fell backward, racing to the bottom. I can say without question this was the most intense experience of my life. Once at the bottom, as expected, all three of us were being forced in the horizontal position by the rushing current. As instructed we were holding on to the rocks to stay in position. It was like being in a hurricane but in water instead of air. My adrenaline was pumping so hard and I could feel myself sucking down my tank so fast I was taking the term "air pig" to a whole new level.
Doug verified Cheryl and I were "OK" and we proceeded to the pull ourselves along the rock bottom with our hands in and around the rocky overhangs until we finally reached the cauldron.  Once inside, the current went to nearly zero and boy what a magnificent place.  I felt like I was with Jacques Cousteau filming an under sea adventure special. The cauldron is like a giant fish bowl with thousands of fish swimming all around.  What makes this site different is the number of large fish in the area which is something special to witness first hand. We saw huge Bumpheads, Sweetlips, Travelly and thousands of smaller types of fish. Since the sun was just rising, it was a little dark as you looked down into the cauldron but looking up and seeing the fish against the light of the morning sky was simply amazing.
Doug asked how much air we had and both Cheryl and I both signaled we each had 100 Barr which is half our tank. This meant we needed to cut our visit short because we had to make our way out of the cauldron and back into the current to reach the pick up point.  We always do a three minute safety stop at five meters at the end of each dive. This stop was especially interesting as all three of us were clinging to the same rock, completely stretched out with hair "blowing" back by the strength of the current. We all three breached the surface without incident and were giddy with excitement knowing we reached our goal. We looked at our dive computers and noted it was only a 19 minute dive!  Typically, under normal conditions a tank will last 45 minutes (even for me). It shows just how pumped up we were.
Once we reached the boat and reunited with the other two groups we realized neither made it to the cauldron because of the current. I must admit that I was proud of the fact that as inexperienced divers we did make it. It was intense and I'm not sure I would do it again, but I know I will never forget the morning we visited Batu Tiga.
After our return to the boat and a hearty breakfast (that did include a cappuccino and doughnut I might add) the group felt like simply relaxing in the lounge area. 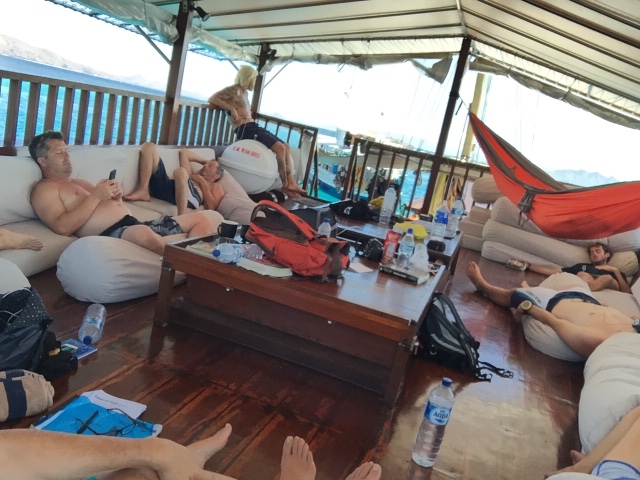 Unfortunately Cheryl and I needed to walk through our study guide questions with Doug. Though we got nearly 100% correct, Doug mentioned that our performance in the dive this morning was already enough to put us over the top so we will receive our advanced open water certification! To think where we started two weeks ago it feels like a miracle (it really is!)
Our 20th (that's not a typo) dive of the trip was at Batu Bolong and a terrific place spend our final hours in Komodo. Brightly colored coral and equally brilliant colored fish. We saw lion fish, puffer fish, a shark, an eel, angle fish, and hundreds of others that I don't know the names of.  Completely opposite of this morning, in that it was very relaxing, almost therapeutic to be out in the water one last time. I'm still in awe of the magical world that lives beneath the surface of the ocean.
We returned back to the Ikan Biru for lunch and prepared for our departure. 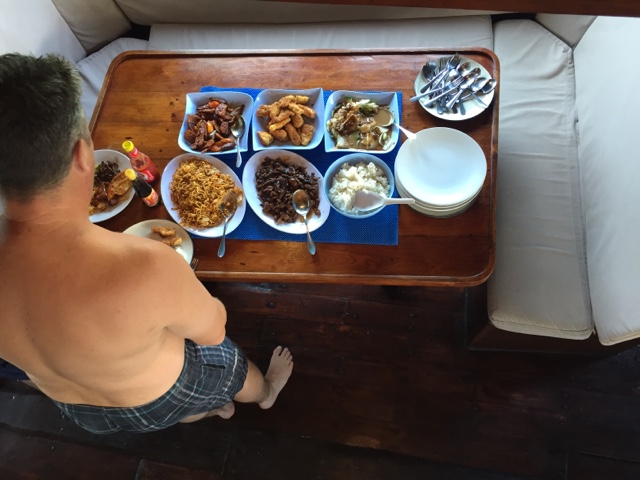 After many hugs and well wishes with our fellow divers and the crew, we boarded the fast boat back to Blue Marlin where we will spend our last night in Indonesia (see how I captured the Ikan Biru in the window?  Not bad eh?) 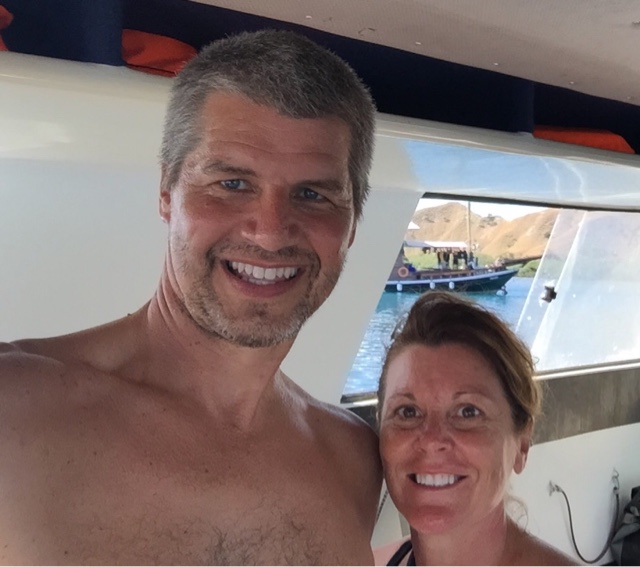 When they say fast boat they are not kidding. Three 200 HP Yamahas. Sheesh that baby could move. 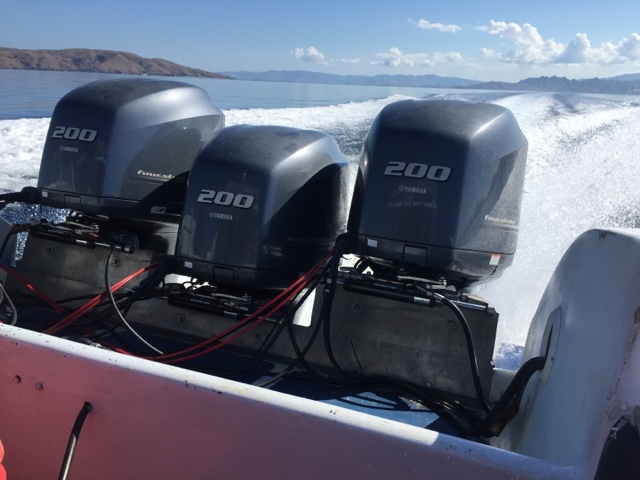 It felt good to be back on dry land and take a long hot shower. We spent some time organizing our clothes and other items we would need for our long trip home which included packing away the flip flops and boy were my feet happy. I treated them to my Roshes. 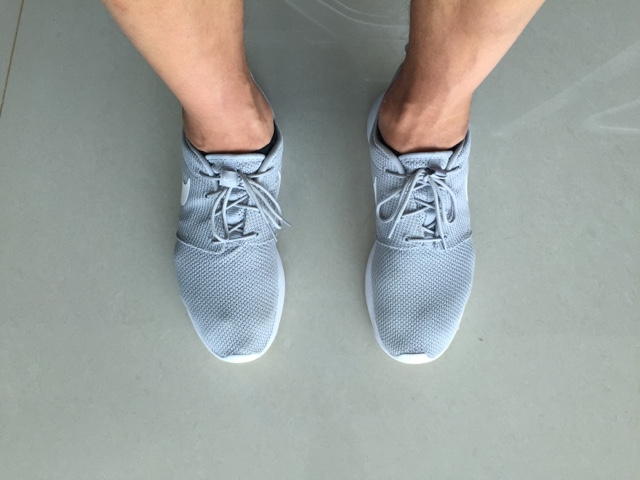 One final dinner in Indonesia at a nice Italian Resturant called Made in Italy (pizza sounded good OK?) and then it would be time to go to bed and begin the journey back home in the morning. Four flights and who knows how many hours. Ugh! 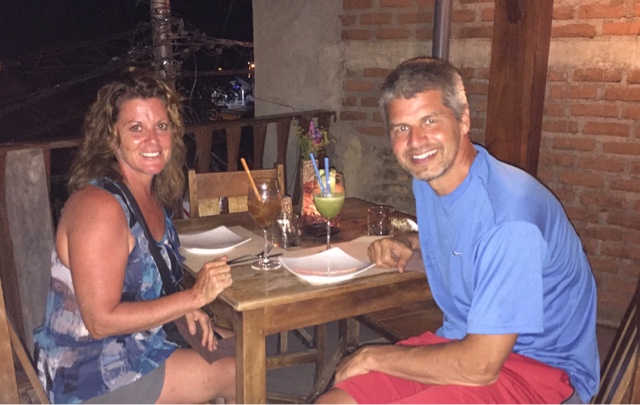 It truly was a trip of a life time and I have many people to thank for it. First of all, Marv for pushing Cheryl and I to commit to it. I don't remember the specific wine we were drinking up at Whistler after midnight Labor Day weekend, sitting at the kitchen table when we pulled the trigger and actually purchased our flights, but they turned out to be the most valuable bottles of wine I've ever drank. Marv did all the planning for the trip, opened up his villa to us and provided us with the best instructors at discount prices. I can't thank him enough.
To all the friends and family who put money in the "kitty" at our 50/50/30 celebration for Cheryl and I to take a memorable trip. It was that money we used to purchase the flights to Bali. I would say we met the requirement of a memorable trip.
To my coworkers back at Nike. Three weeks is a long time to be away and even though I don't do a hell of a lot, I know people filled in where needed to keep everything running smooth.
Finally, thank you Cheryl for joining me on this adventure. It was amazing sharing it  together and something I know we will remember and talk about forever.
So there you have it. For those of you who followed this blog to the end (hopefully there are a couple of you out there), I appreciate you joining Cheryl and I as we made our way through Indonesia. It was a blast!!
Until the next adventure.........
Posted by Chris at 8:49 PM