Winter is finally over!

As the months go by I find the exciting (if you can call anything we do exciting) part of our lives is on the weekends when we go exploring.  During the week we've settled into a pretty solid routine.  Especially in the winter when there is no reason for any sane person to venture outside for long periods of time. People say the weather in Amsterdam is similar to Portland.  Let's put an end to that rumor right now.  First of all Amsterdam is much further North than Portland.  Amsterdam's Longitude is 52.3680° N whereas Portland's is 45.5155° N.  I know that means nothing to most of you earth coordinate challenged people out there but for perspective, Amsterdam is further North than Calgary Canada!  That means it get's much colder in the winter.  The average temperature for Amsterdam is 37 F in January while in Portland it is a balmy 45 F.  As for rain fall, Portland actually gets more (36 inches to 32 inches per year.)  BUT, in Amsterdam you are always outside walking to the store or tram station of riding your bike (the diehards do).  None of this covered parking, automatic garage opener stuff here, so you get WET all the time!  Let's just say Cheryl and I are very happy spring has sprung!!  The tulips are in bloom and people are all out enjoying the sunshine in the Museumplein.  Cheryl and I have even taken the tarps of the bikes and cycling around Amsterdam again (we aren't diehards). 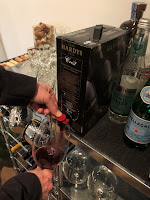 During the week we usually watch a Netflix series (just finished Black Mirror and Pinky Blinders, both highly recommended).  Wednesday's we designated as glass of wine night (maybe two or .....).  We decided to hit the box wine so who really knows how much you drink!  That then gets us to Thursday and our Dutch lessons (tot zover goed) and then it's Friday when we hit the road to go see the beautiful and interesting sites in the Netherlands.  It's been a pretty good "wash, rinse, repeat" sequence.

The big news this entry, however, is that we took a trip back to Oregon to celebrate my mothers 80th birthday.  It was also a time to catch up with friends I have not had a chance to meet up with since I headed over to Europe almost one year ago (sheesh time flies!) 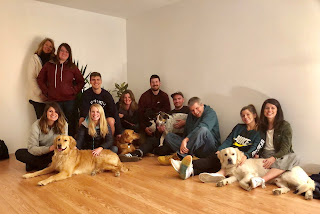 I wanted to spend some time at Nike World Headquarters to see the many colleagues I have not seen in a year.  A lot as changed in a year but everyone is still awesome.  Then then there was setting up the lunch meetings, let's have a beer meetings, dinner meetings with all the friends.  Though it's easy to get in the routine I mentioned above and enjoy the adventures Europe has to offer, there is nothing like reconnecting with friends and family.  So. Much. Fun.

When we were last home in September, Kyle and Lindsay got married, and they followed that with what most newly married couples do (no not a baby yet, damn it), they got a house.  It is a nice three bedroom in St Johns.  Kyle now has a frequent shopper discount at Home Depot and while installing a new floor learned terms like "Arris," "Base Shoe," and "Tapping Block,"  I helped him for one day and looked forward to the term "Beer Thirty."  The whole family got involved helping demo, paint and hammer and the house is looking great.  Just in time for GRANDKIDS! 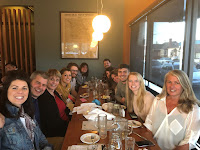 Then there was the 80th birthday celebration!  Actually is was a low key affair with just Corinne, Wilson and local family on her actual birthday (March 24).  We will have a larger celebration on June 2 when all of her "snowbird" friends will be back in Oregon.  It was a fun time capped off by a huge Oregon Duck victory over the Anteaters of UC Irving to get to the sweet 16 of the NCAA men's basketball tourney!

Once back home and the weather got a little warmer and the days a little longer we ventured out into the wonderful world of the Netherlands.  We've taken a few short trips and quite a few selfies as you can see. 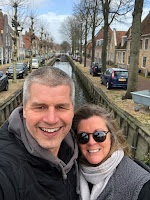 We took a trip to Harlingen, a northern fishing village.  It is a gorgeous little town of about 15,000 people which received city rights in 1234.  Yes you read that correctly, 1234!  Things are old over here.  Fortunately we were able to find beer that was much younger than that and tasted delicious. 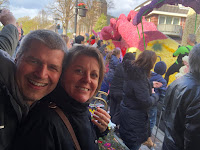 Finally, as everyone knows, Holland is known for it's flowers, especially tulips.  Each year there are many festivals celebrating the coming of spring and blooming of the flowers.  One of the best traditions is the Bloemencorso (flower parade) that runs 30 km from Noodwijk to Haarlem over a span of 12 hours.  It is an amazing event.  People line the route waiting in local pubs and restaurants until the parade passes and they all run out to provide encouragement for the participants as the band continues to play, dignitaries wave and kids throw candy the entire way.  We ended up watching the parade outside a little village pub (big surprise there) in the town called Hillegom.  In order to avoid the traffic we took the train to Haarlem to start the day and then a bus to Hillegom.  In Haarlem, we decided to ride the Ferris Wheel in order to get a good view of the town and surrounding area.  It was a little windy at the top as you can probably tell from the picture! 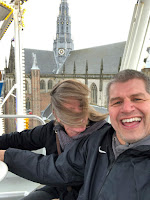 Well that's it for now.  I apologize for then length of time between posts.  Seems like the days turn to weeks and next thing you know a month has gone by.  We are still enjoying ourselves and everyday feels like a new adventure, and if it doesn't, there is always Wednesday and the box of wine.  If you feel like dropping us a line for a more personal response or want to make a reservation at the Winkler Hotel, my email is winksis@gmail.com.  You'd better hurry, though, we have quite a few visitors scheduled to come over.  We are looking forward to a wonderful summer of more traveling and visitors to our little piece of paradise here in Amsterdam!