Is it Bruges or Brugee?

February 9 - March 3
Our focus on the local area continues.  There are many beautiful and interesting places to see in The Netherlands and surrounding areas (Belgium and Germany) and with the winter weather we have decided to stay close to home.  We have already started filling up our summer calendar with trips throughout Europe and visitors from the USA.  It's going to be so much fun!  That is a reminder that if you want to come stay at the Winkler Inn, you better make your reservations quickly as space is limited! 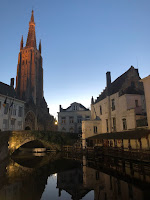 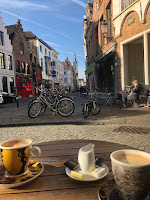 We decided to head south the the wonderful city of Bruges (which is Dutch) or Brugee (which is French).  It's interesting as both are used interchangeably on signs and in documentation throughout the city.  It is a historic city (I say that about all cities we visit) with a population of about 120K in the NW corner of Belgium.  It was an important sea port during the 13th and 15th centuries until the sea inlet filled with silt in the late 1500s.  It became a world financial market and opened what is thought to be the first stock exchange in 1309.  (Ya, I challenge you to find this type of useful information in any other blog!)  Bruges was occupied by Germany in both WWI and WWII and fortunately was spared any destruction and remains an incredibly beautiful city. 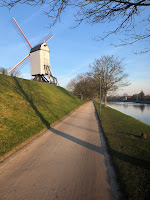 Cheryl and I spent a couple days just walking the city center visiting shops and eating the delicious food.  There is a terrific beer culture (you know me, Mr Culture) there and we, of course, did our share of beer tasting as well.  The T' Brugsch Bieratelier has an AMAZING taster of twelve 8 oz beers.  Don't order this by yourself or you may not make it out!  We decided to stick with the nautical theme like in Rotterdam and stayed on a converted barge on the canal.  It is aptly named Boot Hotel Restaurant De Barge.  Since there was no exercise equipment and I needed to sweat out the pasta and wine (and beer) from the night before, I was forced to go for a run.  My body hates me for days after I go for a run anymore, but once I hit the trail along the canal, my ankle, knees, hips and everything else forgot the pain and were thankful I experienced the beautiful scenery.  Besides, I just kept telling myself, another beer tasting was only a few hours away and everything would be OK. 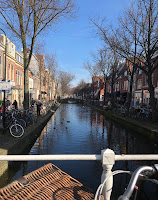 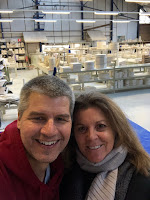 The next weekend we decided to take a day trip to Delft and Gouda.  Both have unique significance in The Netherlands history.  Delft is the city where they make the ceramic plates and vases with blue artwork on them (think grandma's wall).  I'm guessing what grandma had on the wall was probably a knock off as what we observed was quite remarkable (and EXPENSIVE if you got the good stuff).  We visited the Royal Delft Factory and learned the history and manufacturing process for these works of art (you know me, Mr Culture).  Delft was also a very beautiful city (geez I say that a lot too) with canals and a nice market with many delicious street foods for sale.  I also liked the many foot bridges that crossed the canals there and access to the water to feed the ducks. 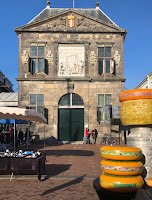 We then hopped in the car and drove 40 minutes East to Gouda.  Gouda is famous for its' cheese, stroupwaffels and ceramic pipes.  We found a parking spot along the canal, and after about 30 minutes trying to parallel park in such a way as to not stick out more than 6 inches into the roadway (because you will lose a mirror) but not drive into the canal (hey city council, wider spaces and rails would be appreciated!) we set off to explore the city.  We quickly stumbled onto the City of Gouda Museum and you know me, Mr Culture, we had to go in.  There were some beautiful paintings from the 1750s and a traveling exhibit "Low Countries" with landscapes from around The Netherlands.  Two museums in one day was about all Mr Culture could handle so we headed to the city center for some wine and cheese!   It was a terrific day trip in the south of The Netherlands.

We've been in Amsterdam for about 10 months and we finally decided to take some Dutch lessons.  Yes you read that correctly.  Cheryl and I signed up for an instructor led (via video stream) Dutch course.  We figured if we are visiting a foreign country for two years, the least we can do is make an attempt to learn the language.  We are two lessons into it and I'm not sure two years will be near enough time.  We know the alphabet (sorta) and can count to 10 (sorta) so we have at least started.  We've found it is helpful to drink some milk prior to the class to get some extra phlegm in your throat to properly pronounce the "g" and "ch." 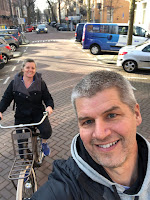 The weather continues to get warmer and warmer and the days longer and longer which brings peoples spirits higher and higher.  We even got the bikes out for a ride last weekend.  It was fantastic.  Time is flying by and it will be summer before you know it.  Can't wait.

In the meantime, we are planning on a trip back to the USA later this month to celebrate my mom's 80th birthday.  Will be fun to be back to see many family and friends.  I'll let you all know how that goes.