Cruise without leaving the dock.

It's been so long since I've written the on the blog, I just had to get back on because I miss everyone out there in cyber land (or space).  Not much of significance has happened because Cheryl and I are still in recovery from the Holidays but we still make it a point experience new more local places/events.

We decided to jump on the A4 and drive an hour and fifteen minutes to Rotterdam for the weekend.  A very unique city, Rotterdam is home to 633,000 people.  It is a major logistic and economic center and believe it or not, is Europe's largest port.  The architecture is very interesting and more modern than other Netherlands cities because the city center was completely decimated during bombing raids in WWII. 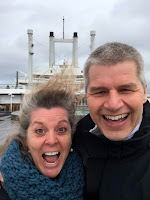 As most of you know, Cheryl and I love cruise ships and since it has been a few years since our last cruise we decided to spend the weekend on the USS Rotterdam.  The USS Rotterdam was launched in 1959 and had a wonderful career (do ships have careers?) sailing around the world until being retired and turned into a floating hotel at it's home port.  OK OK so we didn't really go on a cruise but we had a blast nevertheless.   The ship had all the expected cruise ship amenities like the lido deck and it's 50 mph winds.  Unfortunately there was not a salon on board to help Cheryl put her hair back together.

They did have a piano singer in the Captains Lounge who was very good.  Though I must say it was interesting hearing him say "Welkom in de kapiteinslounge. Dus erg leuk om je aan boord te hebben." Then crank our some Billy Joel and Beatles songs in English.  It was appreciated too. 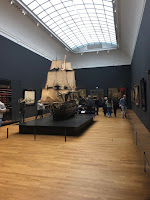 One of our goals when we moved to Amsterdam was to try and get more "cultured."  I'm not sure if that's possible considering we still have our "You Might be a Red Neck If...." calendar in the bathroom.  Ever the optimist, we bought yearly membership passes to The Netherlands museums.  I'm a little embarrassed to admit that we bought them in early December and used them for the first time last week.  For those of you keeping score at home, that is six weeks.  It likely would have been less time if the Heineken Museum was included but unfortunately it was not.  So we walked to the near by and famous Rijksmuseum.  It was as beautiful on the inside as it is on the outside and I was amazed by the fascinating works of art.  My brain was not used to all of that mental exercise so after about an hour we decided to kill some of the cells we just exercised with a few beers.  Hey, we need to slowly lean into this culture thing.  We certainly don't want to pull a muscle.

As for our evenings, during the week we are pretty low key.  We may visit a neighborhood restaurant but usually we stay in.  We've started a few Netflix series.  Ozark was really good though I was bummed there were only two seasons.  We are currently on Black Mirror and House of Cards (OK, I know we are late to the party). 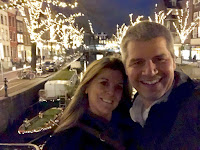 On the weekends we always go exploring.  Sometimes we just grab a Tram and say "OK let's get off at the 5th stop and see whats there."  That usually produces good results but most of the time we've prefunctioned in our apartment beforehand then can never remember where we ended up.  So if you come to visit don't expect a lot of recommendations. 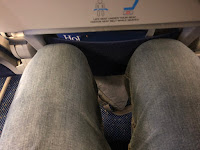 Though Cheryl and I have not traveled outside The Netherlands since the kids left, I have had to travel a bit for work.  I went to Istanbul for the opening of a new office there and then went to Barcelona for a meeting later the same week.  Every time I write statements like that it freaks me out.  Seriously, Istanbul and Barcelona the same week?  The sad part is that sometimes I feel like a "corporate traveler." I get stuck behind a person who actually thinks is OK to recline their seat.  Are you kidding me?  Also when I traveled to Barcelona my flight got in late and I was tired and actually just ordered room service, did some email and went to bed.  OUCH.  Felt bad that I didn't take in the city, so after our meeting the following day I made it a point to go for a walk around the city.