European Holiday with the Family!! 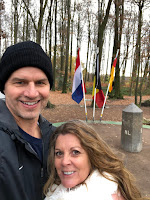 Well it's been a long time coming and something we have been talking about since April.  The Winkler's invade Europe!!  I'll end the suspense right now.  No one got deported or arrested, but we did have a lot of fun.  There is a lot to cover so sit down and grab your beverage of choice and get comfortable.  Personally, I am going to have some water as I need to dry out a little after two weeks of singlehandedly attempting to empty every keg and wine bottle in London, Amsterdam and Barcelona (but more on that later).

Before the family arrived, Cheryl and I took a weekend trip to a fun little village called Valkenburg.  It's about 2 hours and 15 minutes from Amsterdam near the Belgium and German borders.  In fact, that is one of the reasons to visit as you can stand in three countries at one time just south of town. Of course Cheryl and I had to partake and stood in The Netherlands, Belgium and Germany all at one time.  It was pretty cool.

The town of Valkenburg is known for creating a Christmas atmosphere with fun shops and decorations and we wanted to get in the Christmas spirit so off we went.  Now you know those cheesy Hallmark Christmas movies where the entire town looks like a Macy's store window and you laugh at how everything is just perfect down to the carolers walking the streets?  Welcome to Valkenburg.  We had a wonderful time just walking, shopping and getting in the Christmas spirit.  The funny thing was, while we were in the hotel getting ready for dinner we heard drums playing outside our hotel window and when we looked out?  Yep, a Christmas parade.  Did I just say Hallmark movie?

The next week was filled with anticipation as we waited for the our flight to London where we would meet the kids for the first leg of our European Vacation (step aside Chevy).  The plan was to all meet in London but unfortunately Kyle and Lindsay got stranded in NYC because of the drone fiasco at the Gatwick London airport.  Though we missed them terribly, they were able to get a flight to Amsterdam on the 23rd (whew!). 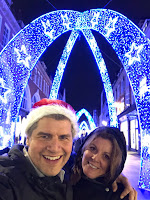 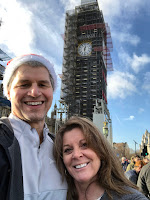 The 2 days (actually 1.5) in London were a whirlwind.  A lot of walking, site seeing, eating and drinking.  If you've never been to London during the holidays it is terrific.  There are decorated streets around every corner.  Not quite like Valkenburg but pretty neat.  We were able to see all the classic sites like Buckingham palace, Parliament, Westminster and of course Big Ben.  That was a little underwhelming as the clock tower is undergoing a renovation but of course we still needed to get a selfie.   We (along with 100,000 other people) walked Carnaby Street which has incredible lights.  To add additional impact, the lighted banners had the words to Bohemian Rhapsody to mark the release of the movie about Queen.   We ate at a terrific Indian restaurant called Dishoom that Jenna had on her list and shared many small plates.  Finally, as if all that was not enough for 1.5 days, we decided on a trek out to Abbey Road where we could walk across the famous crosswalk that the Beatles did in 1969.  It was hilarious watching people try to avoid traffic and get that perfect Instagram shot.  Of course we were right there with them.  I'm sure the locals just love idiots like us stopping traffic 24/7.  Wish we had more time in London but we had to get make to Amsterdam for Christmas! 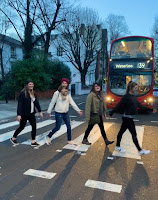 Cheryl and I have been looking so forward to having the kids see our life in Amsterdam.  We wanted to schedule specific activities yet provide everyone time to explore on their own.  You know, so they could smoke a joint or see a sex show in the Red Light District.  Experience the real Amsterdam!  We had everyone stay in our place the first two nights but figured people would start requiring additional space by day three so we rented a room at a neighborhood hotel (come on, we love each other but we aren't idiots!) 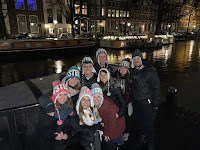 Our first experience was a canal ride on a boat to see the lights of Amsterdam from the water.  Though we had great weather every day but one, it so happened the one was during the canal ride.  We were stuck in a 20 foot boat with plastic on three sides.  Fortunately for us we had plenty of beer and Gluhwein wine to keep us going.  Oh and I mustn't forget the matching Amsterdam hats we got to keep us warm.  The only thing missing from those were the neon lights spelling out "tourist" 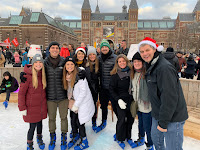 The remaining three days were filled with traditional activities on Christmas Eve like making mini pizzas and watching Christmas movies.  We played board games, drank wine and enjoyed each others company.  It was a wonderful time.  After Christmas we explored the city visiting the Food Hallen (think big food court) wine tasting and of course we had to test our ice skating abilities.  Not a lot to share there except that fortunately there were no injuries.  We took the "More Beer Tour" (think BrewCycle without the cycle) and of course walked the Red Light district.  I must say, regardless of how old your kids are, it's a little awkward walking past half naked women in windows and sex shops and theaters with them.  "Hey kids let's step inside the Banana Bar and see what's shakin'.  I hear the food is delicious"

Two legs down and one to go.  Since the kids spent so much vacation time and money to "cross the pond" we felt it would be a shame to not visit one more European city.  There are so many options!  We discussed visiting the snow in Austria or the Colosseum in Rome but settled on the great and historic city of Barcelona!  Jenna was meeting a friend of hers to taste the delicious cuisine and wine in Paris and was unable to join us.  We missed her but from the pictures we saw, she had a great time.

We rented an Air BnB in a great location near the center of town so we could walk to most places.  And walk we did!  My Apple activity monitor had us walking an average of over 20K steps a day!  We even walked to see the Temple of the Sacred Heart of Jesus.  For those not familiar with Barcelona, that's the one on the TOP OF THE HILL on the outskirts of town.  If you're keeping score at home, I got 21K steps and 131 floors climbed that day.  Did I mention I was wearing jeans?  Hello?  This is vacation! 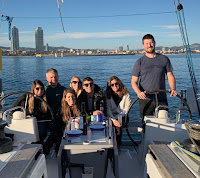 The rest of the trip was a lot of fun.  We saw the Museu Nacional d'Art de Catalunya, the, Cathedral of Barcelona, the Olympic Stadium, attended a Barcelona basketball game and dipped our feet in the Mediterranean Sea.  Unfortunately the tickets to see the inside of the famous La Sagrada Familia were sold out, but just being near the outside is extremely impressive.  A few us even decided to take a sail boat ride on the Mediterranean Sea.  If you're keeping score at home, I got no steps for that trip and was extremely happy about it.

It wasn't all about seeing the sites, we also had some terrific meals and plenty of beer and wine (big surprise there!).  We had street food at the Central Market, amazing paella at Bodega Joan and Italian at the El Nacional.  Barcelona is catching up to the beer culture and we found many great beer places like the Beer Garage and the Humble Beer. 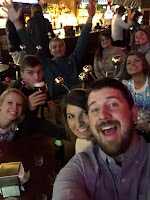 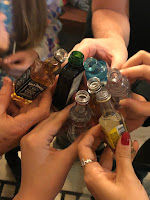 We were fortunate to be able to spend New Year's Eve in Barcelona.  We had dinner as a fun place called Beer'linale.  From there we went back to cheers a fantastic 2018 and welcome 2019 and play Kings Cup.  It was my first time playing this drinking game, and between having to drink with T-Rex arms, naming types of cereal and answering questions with questions, I'm surprised we made it out on the town to celebrate at midnight.  But we ended up at the Dow Jones Bar where prices for drinks fluctuate with how many drinks are sold.  Needless to say, prices soared when the Winklers walked through the door.  We had a great time and loved that we had no where to be the next morning and slept until 11 am.


Unfortunately the time came to say good bye.  Cheryl and I had an early flight back to Amsterdam while everyone else flew out later in the day to London.  I think it was good that the good byes happened quickly in the morning which minimized the tears.  We had so much fun being together and I so look forward to when we are all together again.  Cheryl and I love and miss our family so much.