April 27 is a very special day in Amsterdam.  It is Kings Day and everyone wears Orange (National Color) and party’s hard to celebrate King Willem-Alexander’s birthday.  From what I can tell, King Bill didn’t really do anything important to get a special day (it was Queen’s Day on April 30 before he took the throne) but the people in Amsterdam just love a party.  There is a massive boat parade, people selling their stuff on the street (think ginormous yard sale) and BEER.  There were more smashed Heineken beer cans than I have ever see in my life! Think laying a new layer of asphalt but it's beer cans instead.  We were fortunate to have Mike Kinion and his girlfriend Susan Minoza visiting so they joined us.  As good hosts we gave them the full experience (even using the outdoor urinal!).  In one paragraph I mentioned orange clothes, ginormous yard sale, smashed beer cans and outdoor urinal.  Yep, I'd say that sums it up pretty well.

As anyone who knows us can attest, Cheryl and I LOVE cruises.  Where else can you do nothing, eat and drink as much as you want while on the open sea.  Sounds like heaven to me.  Where better to cruise than on the Mediterranean Sea?  For you geography buffs East of Italy is actually the Adriatic Sea but hey, it's all water.  We decided to hop aboard the MSC Sinfonia for a cruise that would take us from Venice Italy to Split Croatia, Santorini Greece, Mykonos Greece, Dubrovnik Croatia, Ancona Italy then back to Venice. 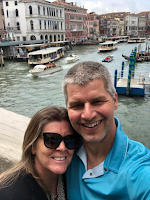 We decided to arrive in Venice, The Floating City, a few days early to see the sites (and make sure we didn't miss our cruise time).  It is an amazing place to be sure.  I first had to get my “vacation hat” to mark the official start of vacation.  Once that important step was completed, we did the tourist stuff and went to Doge’s Palace and visited Saint Marks Basilica.   We got a hot tip on a restaurant called Oliva Nera and it did not disappoint.  Since we were on vacation, we splurged on a Parmesan cheese appetizer.  Had no idea what we ordered but we figured that if it was expensive it had to be good right?  Turns out it was incredible!  It came with a show as the waiter took the 12 month, 18 month and 24 month aged cheese and ever so delicately added drops for 20 year, 30 year and 40 year old balsamic on top.  Wow! 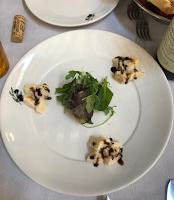 From there we took the water taxi to Murano for a visit.  Murano is famous for it’s glass art.  Cheryl probably would have spent plenty to support the local economy in any state of mind but after a couple bottles of wine all bets were off.  Glass cherries, glass people, glass trees you name it and we have it in glass.  The next day the hangover from the wine was bad enough but then to see the glass…..oh boy.  We really did love Murano though.  Very beautiful and fun to just walk around. 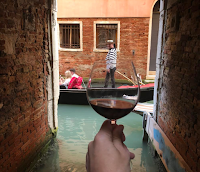 Now it was time for the cruise!  We decided to splurge a little on this cruise and get a window cabin. When we cruise with the family we are always next to the engine room near the bottom in “last class” so this was a treat.  In addition to the window cabin we got the all you can drink cards.  Not sure that was very responsible but hey, it’s vacation!  Besides, I convinced myself I would work out everyday.  Good one Chris, that justifies it!

First stop was Split Croatia on Mother’s Day!  Split is an old fortress town from in the 4th century with many old and interesting ruins in addition to beautiful beaches.  Unfortunately, the weather didn’t cooperate and after seeing an interesting a capella group sing in an old church and walking through the market the torrential downpour had us going back to the ship early (remember that the all you can drink card was waiting for us!).  Fortunately, that was the last rain we would see the rest of the cruise. 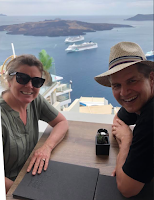 The next stop on our adventure was the Greek Island of Santorini.  Santorini is one of the Cyclades islands in the Aegean Sea and made of volcanic rock.  It is one of those classic Greek places with the whitewashed buildings high on the cliffs overlooking the water.  Quite beautiful.  There isn’t a lot to do there but shop and eat so of course, “when in Greece……..”  We found a wonderful little restaurant overlooking the water where the Sinfonia was anchored and enjoyed an authentic gyro and a local beer.  The combination of food and view was unforgettable (also note the vacation hat!).

Back on the ship and out to sea to the small town of Mykonos Greece.  It’s a small island town of about 10K and known for its thumping beach parties with world renowned DJs.  Of course that is right up Cheryl and my alley.  We had the tequila shots poured and our Sirtaki moves ready but unfortunately the one downside of a cruise is you sometimes don’t get much time at a port of call.  Such was the case at Mykonos where we were only there for 4 hours.  We did stumble on a delicious dessert consisting of a pastry with goat cheese filling with honey glaze.  OMG it was good.  I only wish I could interpret what it was called so I could order it again!

Next up?  Dubrovnik Croatia.  This town may not mean much to most but for you Game of Thrones fans it is one of the filming sites.  The old town sits behind a massive wall that was built in the 12th century.  We don't get HBO so I've never seen the show but I guess I'm supposed to be excited about being on set.  It was really cool city, especially looking down from Mt Srd.

Our final port of call was Ancona, Italy.  Ancona is an old shipping port and we spent the day just walking around.  I’d like to say it’s an amazing place but it didn’t really make too big of an impression so we headed back to the ship get use out of our drink card.

I realize I am waaaay behind on the blog but I have more adventures and a surprise to share but I'll get this posted and get another update in another few da.... uh weeks!
Posted by Chris at 12:01 PM