It's another traveling weekend for the Winkler's.  This time we are on our way to Paris, France!  la Ville des Lumières, The City of Lights.  Since my responsibilities at Nike include Europe, it is important that I visit our Key Cities and other significant properties to ensure I meet the wonderful people working there and understand the local operation.  Paris is certainly one or those places (I know, tough job).

Cheryl and I decided to go a few days early so we could do some sight seeing and enjoy this famous and historic place.  Paris is about 510 km from Amsterdam.  Though you can fly, it is nice to take the train.  It is easy access from Amsterdam (Centraal Station), less security hassle, comfortable and only 3 hours and 20 minutes.    So off we went on Thalys number SSYYOJ Coach 12.  I didn't really do the math in how fast you need to go to cover 510 km in just over 3 hours but I quickly discovered you need to go FAST.  The train travels over 295 km/hr.  Let me help you folks back in the states... that's 184 mph!  That is freakin' fast.  Instead of worrying about what all can go wrong at that speed we decided to have a plastic of wine and relax. 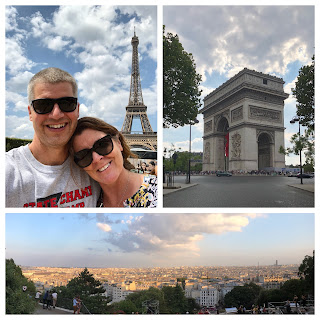 Cheryl and I don't even think about renting cars any more when we travel, we just head to the public transit station and get the metro pass (we're getting so European!)  We jumped on the 54 bus and presto, we were at our Hotel Mercure Paris Montmartre.  We've developed a travel pattern in which we start each adventure with the "hop on/hop off" bus.  It is a terrific way to get an overview of the city, see the highlights then evaluate the other places we want to see during the remainder of our stay.  So far it's worked out well.  I'm not sure what we'll do when we go somewhere that doesn't have one, but we'll cross that bridge when we get there.  We learned so much about Paris during the tour and saw all the major historical attractions.  The Louvre, Arc de Triomphe, Notre-Dame de Paris, Sacré-Coeur Basilica and of course, the Eiffel Tower.  As we visit these historic places I'm embarrassed at how much I didn't know about European history.  For example, I always thought of Nepoleon as a military leader but had no idea the influence he had on the politics and construction of the city.  No wonder they named an ice cream after him!  (yes I know it's Neapolitan). 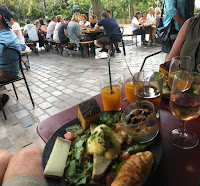 As expected the food was delicious.  We tasted many different types.  We, of course, had onion soup and looked like tourists when we ordered "French" onion soup.  Kind of like ordering Canadian bacon in Canada.  Oh well, we are who we are.  We got some inside tips from a colleague who lives in Paris and went to a few places tourists don't know about.  One in particular was Sunday Brunch at Mon Coeur Belleville.  It was like going to a buffet but they bring everything to you in one shot.  It was unreal.  Couple that with sitting outside, overlooking the city.  Could make my Mt Rushmore of breakfast places. 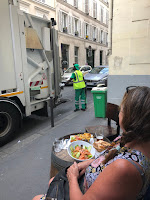 Not all experiences were perfect.  If we didn't go to a recommended spot we simply walked the streets until we saw someplace interesting.  Most of the time this worked out pretty well, but keep in mind, city workers are active throughout the day in Paris.  Take note when you see trash cans sitting outside even in the late evening.  That means the garbage collectors are soon on their way.  There is nothing quite like the sound and smell of a Paris city garbage truck in 30 degree  C (85 F) when trying to enjoy your fish and chips.

As I mentioned above, we like taking public transportation, but that does't mean we are experts.  We decided to spend one afternoon on the famous Avenue des Champs-Élysées.  So we took the subway to Charles de Galle station.  We found our stop OK, but believe it or not we couldn't get out (yes I know, easy to believe).  I thought Barcelona had some tunnels.  I figured we should just follow the sign with the little green person running our the door right?  Wrong.  We lost him.  Good thing there wasn't a fire!  Well we finally reached the street and it was worth it.  This is an amazing place.  The street is abuzz with with people, high end shops and beautiful buildings.  The Tour de France also ends here.  We missed it by a week!


Wow, look at that.  I provided an update one week from the previous post.  Don't get used to it because the next couple weeks are going to be CRAZY, but you'll read about it soon enough.  Until then.....