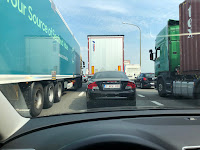 Its been a good couple weeks since my last entry. We continue to pass minor milestones in the life we are creating and living here in The Netherlands.  We are focused on getting out on the weekends and seeing new places and cultures.  Last weekend we thought it would be fun to drive down to Brussels Belgium and watch the World Cup game between Belgium and Brazil.  It's only a 2.5 hour drive and Brussels is a historic city.  We were looking forward to it all week and we left at 2 pm Friday afternoon to give us plenty of time to settle in and find a great spot to watch the game at 8 pm.  It was a wonderful drive for about an hour then we hit some of the worst traffic I have ever seen.  GRIDLOCK.  Google Maps initially estimated our arrival time at 5:30 pm.  3.5 hours?  Are you kidding me?  Well then that sinking feeling where you continue to drive (very slow) and the estimated time extends.  6:00, then 6:30, and finally we pull into the hotel at 7:00 pm.  5 hours from when we left!  The leisurely pub crawl until kick off turned into a mad scramble to find a beer and a seat (in that order by the way).

It was a terrific game to watch.  The weather was perfect and we stood outside a pub looking in at the big screen TV.  Needless to say the town was pretty excited that Belgium beat Brazil 2-1 to advance.  Car horns we honking and people were dancing in the streets until early into Saturday morning and this was only the quarterfinals! 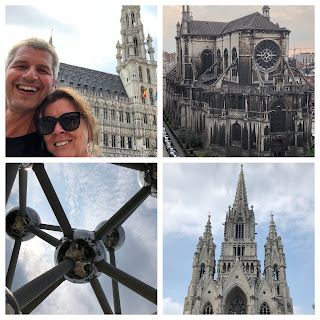 Cheryl and I grabbed an ice cream cone (free extra scoop to celebrate the win!!) then headed to the hotel.  We had a big day of site seeing to rest up for.

Brussels is a city of 2.1 million in the immediate metro area and nearly 5 million in the surrounding area. I was surprised to learn that Brussels is the home of both the European Union and NATO headquarters.  It was also hosted the 1958 World's Fair.  As with Barcelona, we jumped on the "hop on, hop off" bus to see the city.  As expected, there was some beautiful building architecture and a great deal of history.  We saw the Atomium which was built for the World's Fair and the amazing town hall square.

Later the falling week we reached another milestone in establishing our foundation in The Netherlands.  We got a car!  It's a VW Passat .  It is certainly not fancy but it does fine for me commuting to and from work (it sits every night after I get home).  Though it has air conditioning, Bluetooth, navigation and all the bells and whistles, the most important feature is the cruise control.  Why you ask?  Speed detecting cameras that's why!  These pesky little devils are hidden throughout the highway system over here and they are relentless.  I was given a ticket doing 103 k/h in a 100 k/h zone.  They even have apps for your phone to tell you where they are.  I don't even want to play that game.  I set my cruise control at 100 and relax and listen to a podcast.  Just got through "How I built this" with Guy Raz. Highly recommended. 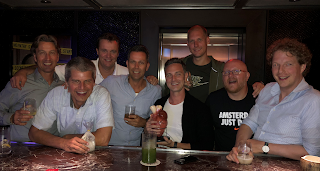 Finally, I took a trip to London.  London?  Yes London.  One of my organizations responsibilities at work is the food services program.  I know people think since I lead this team we only serve pizza and beer but we have a great team who does a terrific job.  However, we want to elevate the employee experience in all that we do but especially in food since that is so important to the employees.  We decided that London is a wonderful city for food with innovation and up and coming trends.  We saw all kinds of new food offerings and operational delivery models.  In addition to that it was a great team building opportunity for the food services team.

It's been a busy couple of weeks with a lot more summer left to come.  Including a very special day on September 8 (a little teaser there).  Until then...........