Another milestone in the books!

I did so well in only having one week between blog entries last time and now it's been over three weeks!  I have a good excuse because we have hard at work checking of milestones on our overseas adventure checklist.  If you're interested, read on!! 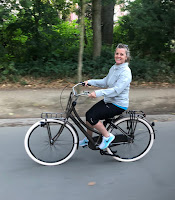 If you've been paying attention (which I know you have), you know having a bike in Amsterdam is critical to maximizing your ability to experience the city as well as just being efficient in how you navigate your way around.  I bought mine after visiting one bike shop for 10 minutes.   As for Cheryl, it wasn't quite so straight forward.  There were many hours of investigation including a thorough internet evaluation and MULTIPLE bike shop surveys.  Did she go for the white Cortina, or the blue Popal?  Hand brakes or the "dutch way.?"  Single speed or multispeed?  Oh so many choices and options to consider.  Then one day she woke up and said today is the day and pulled the trigger.  She decided on a Gazelle PUUR NL 3 2018 Dames 46 cm.  It is a three speed, Sienna brown with rear brakes (the Dutch way). It is a BEAUTY!  We can now explore the four corners of the city as the Dutch do. 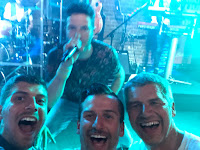 As most of you know, Kyle is getting married September 8 and what precedes a wedding?  The bachelor party!!!  Kyle, 9 of his closest friends and Dad as a tag along took a motor home road trip up north to Canada.  Though I can't go into detail because "what happens on a bachelor party, stays with the bachelor party," I can say it was a blast.  We did a little drinking, playing cards, some more drinking, hiking and trail runs, then to a bar for a drink.  It was a lot of fun enjoying time with "just the guys."  During the trip, I was in a pub buying a round of drinks (shocking) and noticed I had 3 different currencies in my wallet.  How crazy is that? When we moved to Amsterdam, the goal was to visit many different countries and cultures, but in the last 5 weeks I have been in 6 countries (Belgium, UK, France, Netherlands, U.S. and Canada).  Maybe its time to slow down a bit!

It's been been a long road going from an established routine complete with cars, motorhome trips, weekend BBQs and parties at the house, to living in a new city with no routine (unless you count wine every night and weekly trips to IKEA).  The motorcycle went first, followed by the Intruder, then the pathfinder and finally the mini Cooper.  I can now say that the house officially sold!  Cheryl and I have had a mortgage payment in one house of another for over 30 years and now that streak is broken.  It feels strange but in a good way.  It is a liberating feeling knowing that you have no ties to a particular area and have a clean slate when we return.  I may feel differently 2 years from now when we can't find a place to live but hey, let me enjoy the moment.

Cheryl and I have been Hall and Oates fans since before we were in high school.  I'm not going to tell you how long ago that was, but Abandon Luncheonette was the first album we bought.  We have seen them multiple times in concert and before we knew we were leaving, Cheryl bought tickets for us to see them again in the Moda Center.  Since I was already home for the bachelor party, I hung out an extra day so Kyle and I could go to the concert.  Lexie, Kenzie, Greg and our friend Philly decided to join and we all took a trip back in time to watch two old, but terrific musicians.  We exchanged bets on whether or not they would come out in walkers.  They didn't and put on a great show.

Well, that's the latest.  Until next time!