Time to catch up on the blog!!!

Wow how time flies!  It has been almost 2 weeks since my last update.  Sheesh, I was going to update the blog at least weekly.  It's amazing what nice weather (hottest May in 300 years here), good food and wine, plus a bike will do to my planning.  Of course I covered myself saying this wouldn't be a daily blog but at this rate it may turn into monthly!!.

A lot has been happening so grab yourself an Americano and let me catch you up! 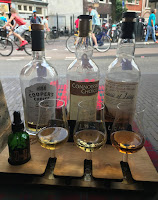 Of course everything starts and ends with alcohol so as to not disappoint, let's start there.  I have been doing may share in enjoying the wonderful wines and "OK" beers here in the Netherlands but as amazing as it sounds, I have not had many spirits.  Marty at my go to coffee shop knew I worked at Nike and turned me on to a whiskey bar only a block away and the owners wife works at Nike.  It's called the Malt Vault and it's pretty cool.  They have many types of whiskey (said Captain Obvious), some of which, are very exclusive brands (I can't name any of them but take my word for it!).  Sitting on the sidewalk tasting whiskey, not bad, not bad at all. 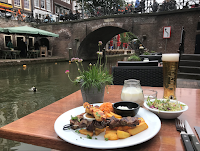 Not far behind the alcohol is the food.  Wow the food here in Utrecht has been really delicious.  I've had salads, burgers, pasta, pizza, kabobs and of course the Ramen and Kangaroo.  Even as good as it is, it is made even better by the atmosphere.  There are a couple shopping areas here where it is foot traffic only (that's serious if bikes are not allowed) that have many shops and restaurants.  A few of the restaurants are located right on the canal which on a sunny day makes anything taste good.  Even my barbecue ham and a can of Safeway Select cut green beans would stand a chance here. 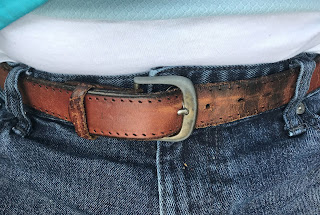 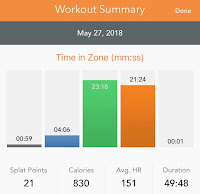 With lots of good food and wine comes lots of good calories.  As you all know I am a exercise psycho and need to work out everyday.  It has been made worse by my obsession with Orange Theory Fitness.  I got hooked on the whole green/orange/red system while in Beaverton.  OTF has an app with a selection they call "Out of Studio" workouts.  Its where your monitor logs your workout with the green/orange/red system away from a studio.  Even here in the Netherlands!  I use it everyday and though I really feel I'm getting excellent workouts in and burning a lot of calories, my belt buckle tells a much different story.  I guess it's time for a new belt! 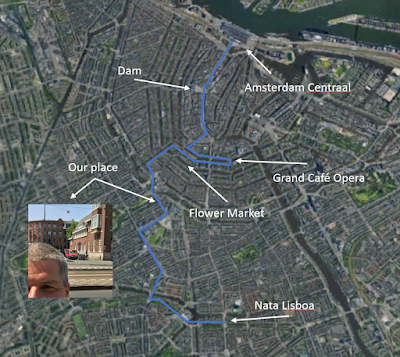 Last Sunday my boss Nuno and his wife Patricia graciously invited me to spend the day with them in Amsterdam to walk and learn the city.  Of course when they said walk the city I didn't think they meant WALK THE CITY.  Hey Nuno, Amsterdam has an amazing public transit system!  Nuno and Patrician are Portuguese so we started at a wonderful Portuguese cafe called Nata Lisboa.  We had some delicious tarts and coffee before heading out for "a 3 hour tour..... a 3 hour tour."   Though I joke about all the walking, it really was a terrific day and I can't thank Nuno and Patricia enough for all the time they spent showing me the best theaters, comedy clubs and markets to go to.  We even walked by Cheryl and my future residence.  It was also my first attempt at navigating the intercity train system by myself.  It's less than an hour door to door from my place but I gave myself two hours just to be sure.  I only had to talk to the information center person twice.  I think that's pretty good! 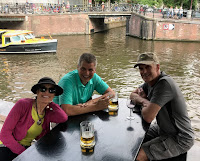 This last weekend I had planned to go to a nice little lake called Henschotermeer for a little run and possibly a jump in the water since it was over 27 C here.  As I was getting my gear together I got a text "Vickiy Van Beek here in Amsterdam!!!!"  For those that don't know, the Van Beeks are long time friends from Tri-Cities Washington.  You may remember them from our visit at Lost Coast Brewery during our 1ktothebay ride (see below).   We never see them where we live.  We want to wait until we are thousands of miles away.  It gives "I was just in the neighborhood" a whole new meaning.  OK, so back to the story.....   So I obviously decided to put the jog on hold and opted for the ice cold beer near the canal in Amsterdam.  Just call me the Rocket Surgeon for making such intelligent choices!  It was soooooo much fun spending the afternoon with the Van Beeks and their traveling friends Paula and Jeff.  I can't wait to see them when I travel to Antarctica.  I can see it now, "Vickiy Van Beek here in Antarctica!!!!"

So that's it for now.  I've got some big things coming up in the next 10 days but I'll leave that as a surprise for now.  Until then, so long from Utrecht!