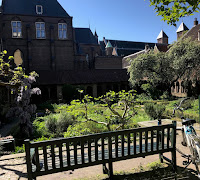 I had the bike for 24 hours so I wanted to maximize the time I had it so I got up early Sunday morning (OK "early" is a relative term) and wanted to go see some more of Utrecht that was outside my immediate neighborhood.  Where to go, where to go........  Well I have had difficulty finding a drip cup of coffee here as everything is in the small cups (pinky out) that are really strong.  Even if I order an Americano they only fill up my hydro flask half way.  OK, there has to be a Starbucks in Utrecht.  Yep only 5 minutes away by bike!  When I arrived, "Venti Americano please" was all I had to say and BOOM! flask was full.  Weather was amazing again.  27 C! (you'll have to figure that out yourself folks.)  I stopped by the HKU Utrecht Conservatorium to just sit on the bench with my wonderful Starbucks Venti Americano and think about things.  It was awesome.

Later that night I was at a restaurant waiting and waiting and waiting for my check.  Seems like serving staff are not in any hurry to present the check in the Netherlands.  Take a deep breath Chris, relax and enjoy the experience I keep telling myself as the waiter walks by my empty plate and glass 20 times.  Anyway I digress.  While waiting, I decided to see if there are any good translator apps that might make my life reading menus and going to the store a little easier.  Duh Chris, ever heard of a company called Google?  I downloaded Google translator and let me tell you, it is freaking amazing.  You point the camera and it translates the text from Dutch to English real time.  It's crazy. No more Russian roulette in the store and getting sardines when I expected chicken!  You have got to try it. 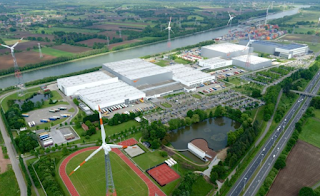 The week so far has been really good.  It probably helps that it is a 3 day week due to the celebration of Ascension Day on Thursday and then an additional day off on Friday (sort of how the US treats Thanksgiving weekend).  Tuesday I actually made my first international trip and ventured into Belgium.  Belgium is South of The Netherlands and about the size of Massachusetts (11K sq miles) but almost twice the population (11 million).  I went with 3 coworkers to see a renovated work area at our distribution center in Laakdal.  It is quite an amazing place though we didn't get a chance to see much of the actual distribution center. I was all fired up to show my passport and get a stamp but, noooooo, just an "Entering Belgium" sign as we crossed the border.  How anti climatic! 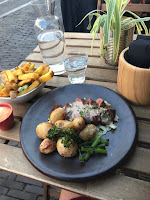 As if traveling to Belgium was not enough international experience for one day I decided to really go off the rails and go Australian for dinner.  Scanning the menu the Kangaroo really caught my eye (not really, the Ostrich was the only other choice).  So I decided to go for it.  I also decided to order a side of french fries just in case.  Believe it or not it was pretty tasty.  Not sure if it was the sauce or the meat, but it had a little kick to it (OK, I couldn't resist).

Thursday was another pretty good day.  I decided to go on a morning run along the canal.  It is really beautiful.  Winding around on the path periodically crossing the streets, running past the shops and cafes.  I almost forget how tired I was.  Since I didn't have a bike I explored my neighborhood to see if I could find a coffee shop close by where I could walk them through a proper Americano that would fill up my hydro flask.  Success!  Now I have a spot in my Binnenstad neighborhood that I can frequent.  The Village Coffee and Music shop made a wonderful cup of coffee for me.  The barista even provided the origin of the term "Americano."  According to popular belief,  the name has its origins in World War II when American G.I.s in Italy would dilute espresso with hot water to approximate the coffee to which they were accustomed.  So there you go........