As with any new experience, it takes time to get settled and that is what I have been doing.  Trying to set the "routine"  I must admit it's one thing to set a new routine when you move across town, but quite another when you move across the world and start a new job.  But I'm adjusting fine.  The Netherlands is really a great place.  The people are so nice and having everyone speak English is a game changer.  Sure I can't read a menu, a street sign or can of tuna (its tonijnstukken by the way) but I am not complaining!. 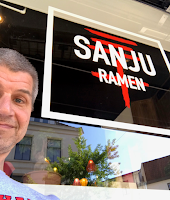 My routine consists of working out at the campus gym every morning and showering there (I have yet to use the apartment shower!)  I'm working long hours now so I won't need to when Cheryl get's here so I get home late, walk to a local restaurant, go to the store and that's about it.

I've tried a different restaurant each night (not much cooking going on in the apartment) but I think I found my go to spot.  It's called Sanju Ramen and the people that work there are really nice and the Hot ans Spicy bowl I had last night was amazing.  I've talked with one of the waiters, Jerome, and I think we will get to know each other over time.

Saturday was a big day.  The weather was amazing so I rented a bike to go exploring the town of Utrecht.  As is common in many cities here, there is a large old temple, church or government building in the center of town.  Utrecht is no different and in this case it is the Dom Tower.  It is a church tower standing 368 feet tall.  There are many wonderful shops and restaurants in the area so I locked up my bike and had a beer at the base of the tower at Brasserie Domplein.  The beer was cheap (2.60

euros!) and the atmosphere was priceless.

I like to consider myself an experienced cyclist in that I have ridden to San Francisco, completed Seattle to Portland and thousands of miles around the Willamette Valley.   Similar to how scuba diving is not swimming, being on a bike in a Netherlands city is not cycling.  Sheesh, these people don't mess around.  There is no joy riding here.  These bikes are utility bikes.  You want to joy ride then get on a back street (which is exactly what I did!)

Well time to get a little laundry done and get something to eat.  It's been a good week thus far.  Though I would have liked to be in our permanent residence immediately, living in Utrecht for a month is going to be an unexpected pleasure I think.  It's a very nice city.  So until next time, I miss you all I hope you are doing well.