Balcony Tub and Game of Thrones!

Seriously, how hard can it be to update a blog?  Sheesh, I am so far behind.  Between all the traveling, food and alcohol tasting and trying to at least fake like I'm doing something at work, I have fallen very far behind on keeping up to date on the blog.   A friend mentioned to me that they enjoyed reading about the Istanbul trip and I thought Istanbul?  That was forever ago.  We've been to Western Germany, Northern Ireland and Berlin since then.  I guess I'd better grab a Heineken (or 3) and start typing.

After that terrific trip to Istanbul we decided to stay a little closer to home for a couple weeks which for us means not flying.  We still wanted to go somewhere new by car or train.  Where to go, where to go.  How about Germany?  Only a 2.5 hour trip by car to the border.  Sounds good!  We settled on a stop in Dusseldorf for a night then to Cologne.  We didn’t put much thought into it (our typical procedure involves a coin and flip), but figured they must have beer, food and old buildings to look at so how can you go wrong?  As a special bonus, the historical Rhine River runs through both cities!

The first learning as we crossed the border was no speed limit.  As you know, I am very gun shy when it comes to speeding following my 3 speeding tickets for going less than 5 km/hr over the speed limit in the area outside Amsterdam.  I didn’t see any of the familiar red, white and black signs so I set the cruise control at what I figured was a safe 100 km/hr and moved over to the right lane with grandma and grandpa.  Much to my surprise, cars were flashing their lights and blowing past us like we were standing still.  I mustered up the courage to go 120 km/hr but that was it and we turned on a “How I built this” podcast and settled in for a nice drive to Dusseldorf. 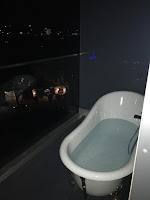 Dusseldorf is a very nice town of about 600,000 people known for telecommunications and art and fashion (I still wore sweats and a T-Shirt).  We stayed at a fun/trendy hotel called 25 Hours and had the option to pay an additional 5 euros for a soaking tub on the balcony and of course we went for it.  Nice that the weather was still warm so there wasn’t too much shrinkage going from the tub to the room.  I signed us up for a boat tour on the Rhine River as I thought it would be a terrific way to see the city.  We decided to go early to ensure we knew where the pier was.  We’d then walk the park and city until our tour started.  What a great plan!  We went to KD Pier and saw one tour boat there and figured we were at the right place and off we went exploring.  We returned 10 minutes before our scheduled departure and as we approached the boat noticed that there were no people boarding.  In fact there were no people at all.  Hmmmmm.  Not a good sign.  So I double checked the location and verified we were at the right pier but upon closer inspection the “pier” is essentially the entire East side of the river bank and our boat was 3 km away!  So much for the boat trip!

On to Cologne.  It is about 45 km from Dusseldorf so an easy and quick (with no speed limit) drive.  There are 1 million people who live in Cologne but it didn’t feel that big.  We stayed at another 25 Hour hotel (our new favorite) in a central location with an easy walk to many fun places.  It was also the weekend of the Cologne marathon.  I was going to run it but unfortunately entry was closed (and if you believe that…).

We of course hit a market and had to have a German beer and Bratwurst.  From there we took a walk to see the Cologne Cathedral.  What a magnificent building!  The area around it has become a central square and many musicians playing and artists producing beautiful drawings on the walkway.  We decided to have dinner looking right at the Cathedral.  I don't even remember how the food tasted.....

My team at work had an off site planning session in Barcelona at the new office facility there at the beautiful La Rotonda building.  It was a quick trip and Cheryl decided not to join me.  The team got a lot accomplished, ate at a nice restaurant and enjoyed some authentic Flamenco dancing.

The next weekend Cheryl and I got itchy to fly somewhere so we decided on Ireland before it got too cold.  We settled on the logical choice and were headed to Dublin.  A couple weeks before, we were strolling around Amsterdam and walked into an Irish bar for a beer (big surprise there).  While bellying up to the bar, we struck up a conversation with the bartender and he convinced us that Belfast was a better place to visit.  So we changed our plans and headed to Northern Ireland.  Though I'm sure we would have enjoyed Dublin we had a terrific time in Belfast. 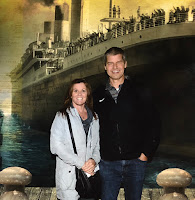 There is a lot of history in Belfast. It is a city with a population of about 300,000 but in its hey day in the early 20th century was over 450,000.  It is a town know for linen production, tobacco, rope manufacturing, and of course ship building.  The Titanic was built in Belfast in 1912 by the famous ship building company Harland and Wolff.  There is a wonderful interactive museum at the site where the Titanic was built and Cheryl and I had a great afternoon there learning about the terrible, yet fascinating tragedy.  Yes we even paid the 10 euros for the cheesy staged photo. 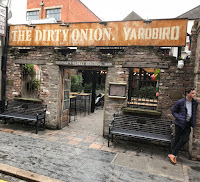 We also spent a day wondering the city center with all of the historical buildings including City Hall (which was very cool).  Two of the oldest buildings in Belfast are pubs, so of course we had to check them out (Dirty Onion 1680, Kelly's Cellars 1720).

One of the prettiest drives in the world (at least that's what the locals say) is the Causeway Coastal Route.  This drive consists of beautiful countryside and rugged coast line with castles to see and other points of interest.  Unfortunately the weather didn't cooperate and we had to deal with the rain the entire day.  This, coupled with me having to drive on the left side of the road had trouble written all over it, but we survived. 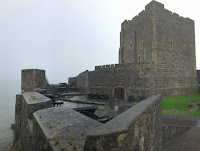 We visited the Carrickfergus Castle, Bushmill Distillery and the Dark Hedges.  Bushmill Distillery was granted a license to produce whiskey in 1608 and built the distillery in 1784.  The official tastings were closed for the day when we arrived but that didn't stop us, we just split shots!  Too bad I had to drive us home (that left side of the road thing too) and the tasting was cut short.  The Dark Hedges was also a fun stop.  Many of you may know it from the Game of Thrones which is filmed in Northern Ireland (another fun fact brought to you my the Winkler European blog!)

Cheryl and I are really enjoying our time here trying to maximize this opportunity which fills up the days.  We miss the family a lot and CAN NOT wait for Christmas when they will all join us here in Amsterdam.  It is going to be sooooo much fun.