With a successful and wildly fun wedding behind us and a lovely new daughter law in the family, Cheryl and I can get back into the routine of exploring Europe.  Next stop?  Istanbul Turkey.  Yes you read that correctly.  I am going to Istanbul Turkey.  6 months ago I couldn't find Istanbul on a map and now I'm going there.  This sh*t is crazy!

Nike is opening up a beautiful new office space in Istanbul and my team gets to provide the service experience for the employees there.  We had an all employee meeting to introduce the project so Cheryl decided to join me after the meetings so we could take a long weekend and explore this wonderful mid-eastern city.

Before Cheryl arrived, I had the fortunate experience to join my Nike colleagues and watch the first game of the Champions League at Turk Telcom Stadium.  Team Galatasaray  from Turkey and Lokomotiv from Moscow played with Galatasaray winning 3-0.  It was an AMAZING experience.  People often say how popular and fanatical the fans are in Europe but OH MY!  I had no idea it was like that.  We arrived 30 minutes early and there were no players on the field and the place was ROCKIN’!  Cheer’s and songs going non stop from 30 minutes before the start until the game ended 2 hours later and they don't even serve alcohol in the stadium!  My ears were ringing like I had just finished an AC/DC concert.

I know many of you probably snickered when I said I didn't know where Istanbul was, but I would bet any of you a glass of raki that you wouldn't come within 200 kilometers of it on an unmarked map (go ahead and try smarty pants).  A few fun facts for you.  Istanbul is the worlds 7th largest city (largest in Europe) at over 15 million people.  The Bosporus Strait that connects the Mediterranean Sea and the Black Sea is the boarder of Europe and Asia and goes through the city.  The currency in Turkey is the lira which is worth about 1/6 of a euro (keep that in mind for later).  Cheryl and I stayed in the Taksim area which is in the heart of the city and a across the "Golden Horn" from the historical section of the city. 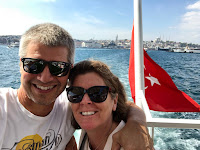 Following my work commitments, Cheryl arrived Wednesday evening and took a cab to our hotel.   I reminded her that cab drivers only take cash so be sure to have cash.  What I neglected to say was lira cash.  I happily met her in the lobby and before the hug, before the welcome kiss, the first thing she said was “wow that cab was expensive!  It was 120 euros!”  I felt a hot flash as I realized she paid 6X the cab fare (or 20 euros!)  I suggested we go have a drink in the bar then I broke the news that she made the cab drivers week by paying him a days wages for one cab ride.  Oh well, a Merry Moment came early in Istanbul. 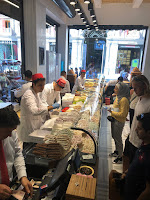 The weekend was filled with visiting old historical sites including mosques, shopping in the markets and eating many delicious meals.  The sweets are especially delicious and we had our share of the Turkish specialty made by Hakkizade (est 1864). 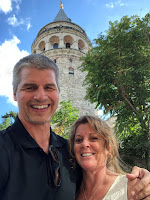 There were many highlights, though I'm not sure what to share.  We went to dinner at Sur Balik seafood restaurant on the waterfront with a fantastic view of the Bosporus bridge.  We toured the Basilica Cistern (an underground reservoir) which was built by the Romans in the 6th century.  That's freaking OLD!  We really enjoyed the markets.  There was the Grand Bazaar and the spice market each filled with a variety of things to buy (Cheryl was in heaven).  She even got a pair of Birkenstocks for 60 TL (or 10 euros for you people tracking at home).  Of course they were knock offs but hey, as long as they aren't Nikes. 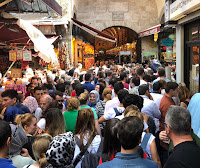 Though everything was very interesting, my most vivid memory was at the intersection of two streams of pedestrian traffic entering the Grand Bazaar. I have never seen (or felt) so many people in such a confined area.  If you are claustrophobic then you avoid this area at all costs.  It was insane.  People "copping a feel" and not even meaning to.

Another fantastic European city (or is it Asian?) to check off our list.  We have many more planned and until next time......