We Have an Amsterdam Address!

It was a huge day for us today.  We are going to decide on our apartment for the next 2 years.  It’s down to two but we discussed it all weekend and we are pretty sure which one we will take.  But first we need some breakfast and we’ve found there are not a lot of bacon and egg places around but there are a ton of bakeries.  We hit the “Ice Bakery” (a chain here in Amsterdam) and not wanting anything too sweet Cheryl decided on a waffle.  “What would you like on that?” she was asked.  “Strawberries, whipped cream, Oreo cookies, Nutella, sprinkles, bananas, sour patch kids…….” At that point Cheryl declined and settled on an apple turnover.  I also didn’t want anything too sweet either so I decided on a white frosted doughnut.  To my surprise, as I bit into it I realized it was filled with Nutella.  Sheesh, the Dutch like their sweets!

Off we went to check out the two apartments.  We were pretty sure we wanted the one with a gated entry on street level because the layout was very practical and it has a very large deck, however, we needed to look at them both again.  Though we loved the beautiful main floor of the 3rd/4th floor unit, the stairs were a killer, even for Amsterdam.  Believe it or not, this was only the first flight of stairs!  So we decide against this one.

The apartment we settled on is a 2 bedroom with a very unique lay out for Amsterdam.  There is a gated front all to ourselves, a large entry way and the stairs are broken up.  The guest room has some privacy and there is a huge deck off the living room.  I can only show pictures from the outside because it is currently occupied and current renter doesn't appear to know what clutter is.  The bottom line is that we have a place with a real Amsterdam address!  Are you ready for it??? Alexander Boersstraat 54 II. 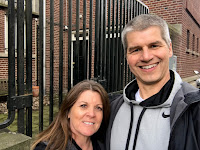 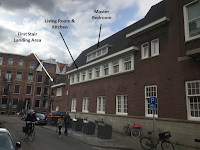 Time to head home bright and early in the morning.  We'll catch up on a few things then, I'm back over at the end of April to stay here permanently (well 2 years feels pretty permanent)  So until then.........